New revelation has emerged showing how the abducted Chibok girls were radicalized and married off to Boko Haram terrorists. 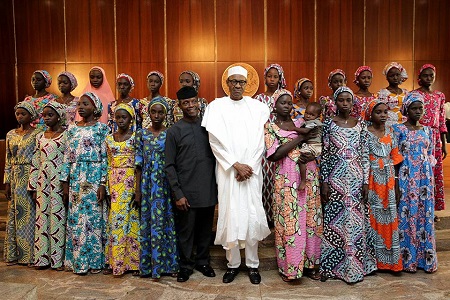 Some Chibok girls and President Muhammadu Buhari
The Chibok community in Abuja has confirmed the identities of 73 of the 82 recently-released school girls, saying they were among the over 200 girls abducted by the Boko Haram terrorist group in April 2014, Vanguard reports.
Speaking with journalists at the special sit-out of the Bring Back Our Girls, BBOG, movement, yesterday, in Abuja, Chairman of the Chibok community in Abuja, Hosea Tsambido, however, said the outstanding names would still be cross-matched with a second list, which he said was not in his immediate possession.
He said: “As for me, the list I have matches with the names of the released girls. In fact, almost all of them, because, the list that I have is not complete, so some have not appeared on it but I am sure that when I get the remaining part of the list, the names of others would be there.
“Only nine of the names out of the 82 are not on my list, which, of course, is the original list written by hand, by the parents when they came to give details of their missing daughters.
“However, there were other parents that came later on, and that is why the other nine names are not on my list.”
Tsambido also restated his earlier revelation that only one of the girls’ parents had been able to establish contact with their daughter.
He said: “Like you reported earlier, only one person has been able to establish contact with her daughter and the man is in Lagos. There is the issue of communication infrastructure. The ones (parents) in the village, no contact yet.
“What is on ground now is that the Federal Government has sent the pictures of the girls home so that people can identify their daughters; perhaps, there would be a set time, when government would invite such parents who are able to identify their daughters. That is what we are waiting for.”
BBOG faults Buhari’s ‘cold’ reception for Chibok girls
The BBOG on its part, faulted the Presidency for the ‘cold’ reception given the girls during their meeting with President Muhammadu Buhari, saying the moment should have been one of great emotions and not a ceremony.
Leader of the group, Aisha Yesufu, who said the process of authentication and reunification of the girls was now taking too long, noted that government should show that Nigerians have been eagerly waiting to receive the girls.
She said: “It is taking too long to get the reunification and authentication done. The last time 21 were brought in, it was the vice president that was in charge and the way they went about it is quite different from now.
“Rescue of the Chibok girls is not a privilege but a right. First, we failed them and they were abducted. We must now ensure their rescue, rehabilitation and reintegration and also ensure that they go back to school because if we don’t send them back to school, then the terrorists would have won because it is their intention to see the girls out of school.”
No Chibok girl had choice of being rescued or left behind
Meanwhile, contrary to claims that some of the Chibok girls refused to be freed along with others released by Boko Haram last weekend, indications emerged, yesterday, that none of those girls had any such option to choose to be freed or left behind in the custody of the terrorists.
A top source, who was actively involved in the negotiation for the release of the girls, told Vanguard exclusively that the issue of any of the trapped girls deciding whether to return home or stay back with the terrorists did not arise throughout the discussions for their freedom.
The source said that unknown to many Nigerians, many of the Chibok girls and others were immediately radicalised and married off by the Boko Haram members upon capture.
The source said that the girls in that category might never return, as they have since become the wives of Boko Haram members and cannot be said to have refused to be rescued.
According to the source, who has been mediating between the terrorists and the Federal Government to free the girls, the government negotiation team merely accepted and took away the girls brought out by Boko Haram.
5 commanders
The top official pointed out that while the Boko Haram sect specified the names of its five commanders it wanted released in exchange for the 82 girls, the Federal Government did not have a choice but to receive the 82 released by the group.
He said: “We were in a kind of dilemma because even though we wanted all the girls back in one fell swoop, the sect eventually agreed to release only 82 to us.
“Again, while they named their commanders to be released, the government could not pick and choose which of the girls to be released and which to be left behind in the custody of the terrorists.”
Top Stories