About six people traveling along the Lagos-Ibadan Expressway have lost their lives in a fatal road accident after their car rammed into a truck.

The victims of the tragic accident. (Photo:Sam Awoyinfa)
Six persons have died in an auto crash which occurred on Monday at Sagamu inter-change area along the Lagos-Ibadan Expressway, according to a report by Punch.
It was gathered that about six persons, one male and five females were involved in the tragic accident. The Toyota Quest sport utility commercial vehicle involved in the accident with number plate - FKJ 297 AJ coming from the rammed into a moving Iveco truck from behind killing all occupants.
The Public Relations Officer, Ogun State Traffic Compliance and Enforcement Corps, Babatunde Akinbiyi, said the driver of the commercial vehicle was speeding and that the car rammed into a moving Iveco truck with number plate LND 902 XE. 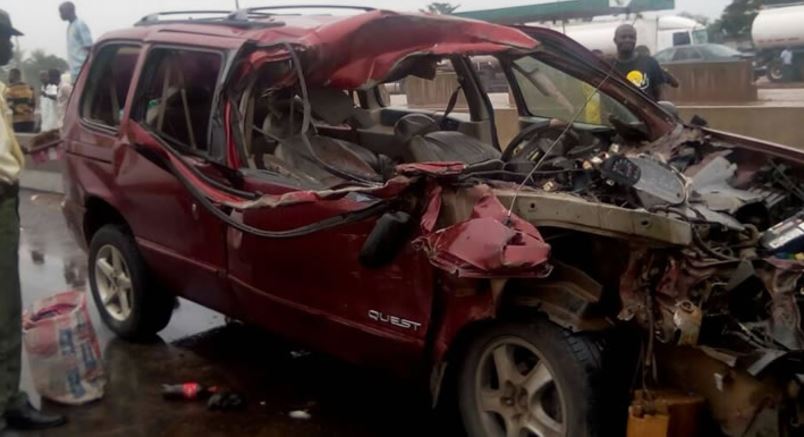 All the passengers in the Toyota Quest died, Akinbiyi said.
He said, “The accident was caused by speeding by the driver of the Toyota Quest commercial vehicle, who rammed his car into a moving Iveco truck from behind, killing all the occupants.
“I could not say where the vehicle was travelling to, but it was coming from Lagos.”
Akinbiyi said the corpses of the victims had been deposited at the mortuary of Olabisi Onabanjo University Teaching Hospital, Sagamu, Ogun State.
Top Stories