Why APC Cannot Be Ashamed of Aregbesola - Lai Mohammed Speaks


Spokesman of the All Progressives Congress, APC Alhaji Lai Mohammed, has come to the defense of Osun State governor,Rauf Aregbesola amid the financial crisis in the state. 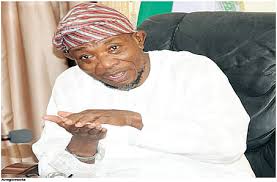 Gov. Rauf Aregbesola
Despite the outstretched arrears of salaries owed public workers in Osun State, the spokesman of the All Progressives Congress, APC Alhaji Lai Mohammed has given reasons why the party cannot in any way be ashamed of the governor , Ogbeni Rauf Aregbesola, or his record of performance.
In an interview with Vanguard, Lai Mohammed said: "Osun State is probably the most cosmopolitan state in the whole of Nigeria. We are very proud of our governor, Rauf Aregbesola and we stand by him because he is one of the most proactive governors, he is one governor that has taken the reason for governance very seriously.
"What happened in Osun State is as follows: Up to 2013 December, the average that was distributed between the three tiers of the federation was about N800 billion a month but as of May last year, N338 billion was what was distributed, so what you have is that most states have suffered more than 50 per cent decline in revenue accruing to them from the federation account.
"Osun State is not just the most cosmopolitan, it has the highest number of cities in the whole of country, Ilesha, Oshogbo, Ikirun, Ife and many more. So, by the time this decline came, Aregbesola had embarked on a lot of pro people programmes that had to be sustained and maintained such as the one meal a day programme for school children, the O-YES programme that employed so many people and kept crime at the lowest level in the whole of the country.
"He had embarked on social welfare for the very elderly, school expansion and because of the introduction of the one meal a day programme, school enrolment had exploded.
"So, the fact that a state cannot pay salaries does not mean the governor has been guilty of embelzement or misappropriation of funds, after all, there are some states that take derivation from oil that are still owing.
"I will be ashamed of the governor if for instance I know for a fact that he took the money belonging to the state, misappropriated it or spent it unwisely or embezzeled. So far, nobody has come out to accuse Aregbesola of misappropriation of funds or if even being insensitive to the plight of the people."
Top Stories