Some young Nigerians have been caught on camera riding their motorcycles feverishly on the Sokoto Airport runway. 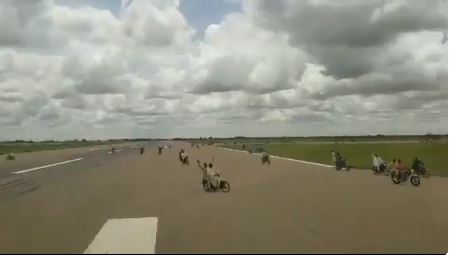 The runway was overtaken by motorcycle riders
A video has emerged, showing the Sokoto Airport runway being overrun by alleged supporters of an unnamed politician who rode motorcycles in solidarity.
The video was shared by a Twitter user on Saturday. The motorcylce riders seemed to be in pursuit of an aircraft supposedly carrying the politician.
The video shared on @diaryofpilot showed that it was shot from inside a taxiing plane and shows motorcyclists right on the same runway as the plane. The captain can also be heard calling for help to clear the motorcyclists from the runway.
The video was captioned: “Happening in Sokoto Right now… The Runway filled with supporters of some candidate… Where did we get it wrong as a country?” 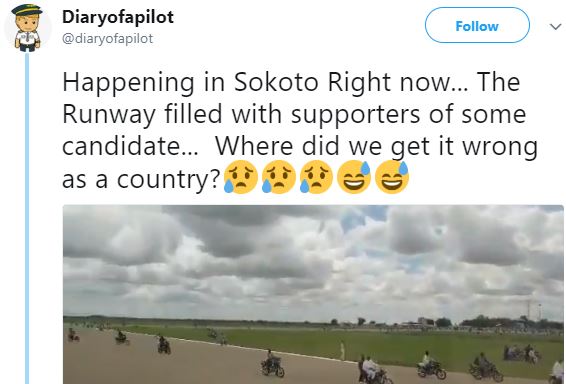 Angry Twitter users have reacted to the video, condemning the foolishness of the young men on motorcycles.
Watch the footage below:

Happening in Sokoto Right now... The Runway filled with supporters of some candidate... Where did we get it wrong as a country?ðŸ˜¥ðŸ˜¥ðŸ˜¥ðŸ˜…ðŸ˜… pic.twitter.com/vSWICu9vVO