Drama As Power-Drunk DPO Storms A Mosque With His Team, Raid Worshipers, Others


A Divisional Police Officer has reportedly stormed a mosque with his team, raiding worshipers and other persons. 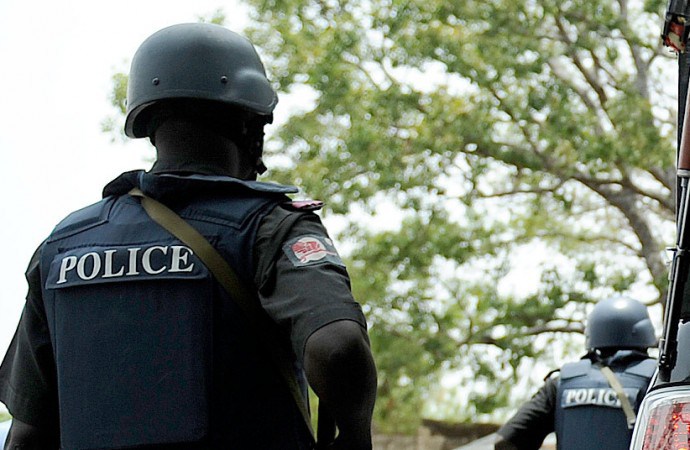 File photo
According to a report by Punch Metro, the Divisional Police Officer in charge of the Pen Cinema Police Division, Lagos State, H.E. Nwabuisi, has been accused of conducting raids during which he allegedly arrested innocent residents and extorted money from them.
Nwabuisi, a Superintendent of Police, was alleged to have led his men to Alimi Ogunyemi Street, in the Ifako Ijaiye area, where some Muslim faithfuls, who had just finished praying in a mosque, were allegedly rounded up around 8pm on Wednesday.
The police team, which reportedly had a Black Maria and four police vans in its convoy, was alleged to have also raided clubs and picked up passersby in the area.
Around 12am, the team was said to have taken all the suspects to the Pen Cinema Police Station, where about 37 arrested residents were forced to pay money for bail.
One of the victims, Sheriff Aranjure, said the policemen called the victims out from the cell one by one, adding that they demanded N15,000 bribe from each person to release them.
Sheriff said his elder brother, Ibrahim, bargained with the DPO through a police sergeant, adding that Ibrahim paid N30,000 for three arrested Muslims.
He said, “Our mosque is in front of our house. We had just observed Ishai (8pm prayers) and were in front of the mosque when the policemen from the Pen Cinema Police Station appeared. They had a task force van, a Black Maria and four other vehicles.
“Before they got to the house, they had arrested some people. When they got to the front of the mosque, they stopped a motorcycle rider and arrested him and his passenger.
“The man that led the team was the DPO of the Pen Cinema Police Division. The name on his tag is H.E. Nwabuisi. He came to where we were and asked what we were doing outside. We told him that we were in front of our house and we had just finished praying in the mosque.
“He ordered some of the policemen to take us into the Black Maria. We asked what we did wrong. When I tried to resist, the DPO dragged me by the shirt and tore my clothes. They took three of us into the Black Maria.”
Sheriff said others taken with him were a 15-year-old boy, Ahmed Ogunyemi, who had been asked to buy drugs from a kiosk in front of the house, and one Isiaka Adams, who was said to be in his early 50s.
He noted that the policemen visited a club on Emmanuel Olorunfemi Street and arrested some of the patrons.
One Seyi was also reportedly picked in front of his house on Coker Street.
“After they raided other places, we were taken to the Area G Command and put in a cell. They went out to conduct more raids. Around 15 minutes to 12am, they came back with new people. They put all of us in the Black Maria and took us to the Pen Cinema Police Station. We were about 37 people that they arrested. When we got to the station, they asked us to write our names. They started calling us out one by one, asking if we wanted to bail ourselves,” he added.
Sheriff’s brother, Ibrahim, who allegedly paid N30,000 for the bail, said he was lucky to have escaped arrest.
Ibrahim said despite his illness, he joined a tricycle to trail the policemen after his brother was arrested.
“Aside from Sheriff, I was the one who sent the 15-year-old boy they arrested on an errand to buy drugs for me because I was ill. So, when I saw what had happened, I followed them in a tricycle. We trailed them as they went to Area G. But from my observation, it appeared the area commander did not know anything about the raid.
“When they got to their station, I saw one of them, called Bigi, a police sergeant. He asked me what the problem was and I told him what had happened. He went to meet the DPO and negotiated on our behalf. They collected N30,000 for the three of them. Bigi said it was important that we secured their bail that night because they would take them to court the following day. For fear that our people could be arraigned for what they knew nothing about, we had to look for the money that night.
“In my presence, he gave the DPO the money and they spoke briefly. The owner of the bar where some other people were arrested also paid some money to the policemen,” he added.
The Ogun State indigene said he was ready to testify against the senior police officer, urging the authorities to call him to order.
“The corruption at the station is at the highest level. The DPO always leads the raid and extortion. This is the fourth time I will see him do that. I can say it to his face. I do not fear him and I am ready to testify against him,” he added.
Another victim, Adams, described the conduct of the DPO as unprofessional, saying the harrassment of the residents was unwarranted.
The state Police Public Relations Officer, CSP Chike Oti, confirmed that there was a raid in the area, but denied that the DPO extorted money from those arrested.
He said, “It is a blatant lie. There was indeed a raid on black spots in the area. This was after a tip-off that the Awawa Boys and some other cults planned to engage in a gang war. The DPO swung into action and a lot of the cult members were arrested. This is in keeping with our commitment to always keep Lagos residents safe and the state crime-free.
“However, the state Commissioner of Police, Edgal Imohimi, has ordered an investigation into the allegation.”
Top Stories