US President, Donald Trump Referred To Buhari As 'Someone So Lifeless'


An international media was written of how lowly President Trump regards Buhari following their meeting some months back. 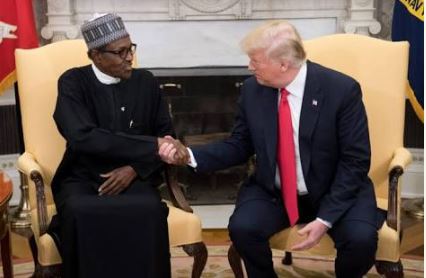 President Muhammadu Buhari and President Donald Trump
Donald Trump will welcome Kenya’s Uhuru Kenyatta to the White House on Monday for what will be only the second one-on-one meeting the US president has held with an African leader since he took office last year.
The first meeting, with Nigeria’s ailing 75-year-old Muhammadu Buhari in April, ended with the US president telling aides he never wanted to meet someone so lifeless again, according to three people familiar with the matter.
Advocates of closer US-Africa ties hope his encounter with the younger, more urbane Mr Kenyatta, 56, will breathe fresh life into a relationship with a region that Washington is seen to have neglected as other countries, notably China, develop ever-closer trade and investment ties with the continent.
Under Emmanuel Macron, France is also trying to reset its relationship with its former colonies in Africa and deepen commercial ties with bigger economies in the Anglo sphere, such as Nigeria and South Africa.
“Trump likes chemistry,” said a person in touch both with senior US administration officials and the Kenya delegation preparing for Monday’s meeting. “Africa has never been high on his radar but if the big guy likes you he’ll find a way to make things work.” 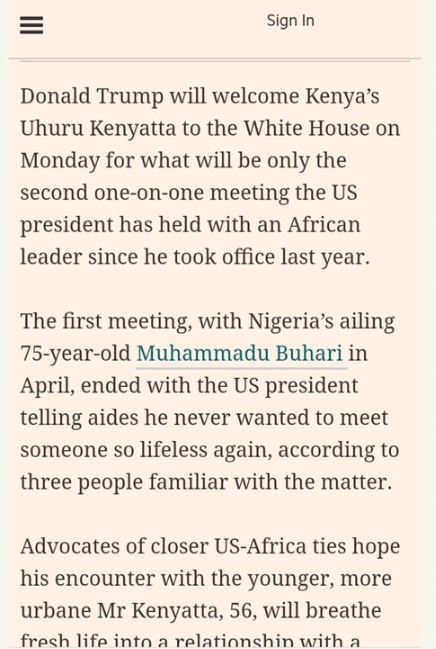