A man suspected to be a cultist has had his life cut short after cultists from a rival group attacked him in Benue. 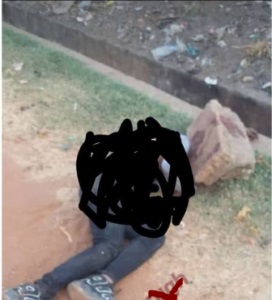 The victim
The renewed cult violence in Benue state, has claimed one life.
A suspected cultist was brutally killed by rival gang members yesterday night in Benue state.
It was gathered that the deceased was butchered during the attack and had his head smashed with a big stone around Ankpa quarters in Makurdi, the state capital.
According to reports, the corpse of the deceased is still at the spot where he was killed as efforts are being made to contact the police over the issue.
This is coming weeks after a young man was shot by gunmen suspected to be cultists inside a vehicle in Makurdi, Benue State capital.
Top Stories