He explained that he came up with the idea of using syringes to replace the hydraulic hose in the real machine and it worked for him. 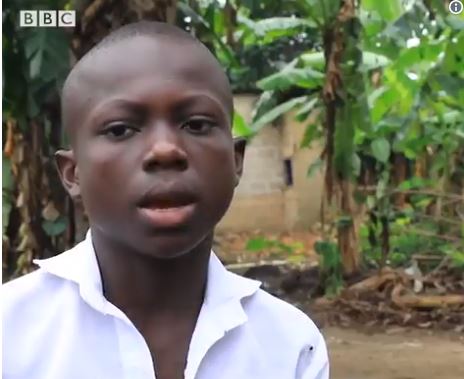 At a time when some of his age mates are in the news over cyber crime and different undesirable acts, Hope Frank, a 15-year-old Nigerian, has caught global attention.

A native of Akwa Ibom state, Frank makes construction automobiles, including excavators, tippers and dump truck from wood, condemned batteries and a drip-set.

Frank told BBC that when he first saw an excavator, he thought to reproduce the machine but had problems getting it to move.

He explained that he came up with the idea of using syringes to replace the hydraulic hose in the real machine and it worked for him.

“When people see me on the street operating my excavator and tipper, they are usually surprised. Some of them dash me money,” Frank said.

“The first time I saw an excavator, I thought, oh, let me just try this. I did the skeleton part and the flex, but it was not all that enough, like how to get them to move was my problem. I then thought of the idea of using a drip-set replacing the hose in the real excavator and the syringe works as the boom.

“For the tipper remote, I used a change over-switch for the forward and backward drive. I used condemned laptop batteries as my source of power in the tipper.”

Frank said he hopes to be grouped alongside Benjamin Franklin, Graham Bells, the Wright brothers, Thomas Edison (inventors of electricity, telephone, airplane, and electric bulb respectively)–as one the greatest inventors in the world.

He added that he plans on working on a helicopter flown with a wireless remote.

“My next project will be a pay loader that can work and a helicopter that will fly with wireless remote. In the future, I want to be one of the world’s greatest inventors,” he said.

Many Nigerians have taken to social media to give accolades to Frank, calling on the government to help him hone his skills.

Here are some of their reactions:

"My next project will be a helicopter that will fly with a wireless remote."

Hope Emmanuel Frank is the Nigerian teenage engineer who uses old batteries and syringes to power up his awesome inventions. ðŸ‡³ðŸ‡¬ðŸšœ pic.twitter.com/64RJsBp1Cy

Whatsapp Will No Longer Work On These Devices From February 1, 2020