A car has rammed into a moving truck along the Lokoja-Abuja road, leaving as many as three persons hurt. 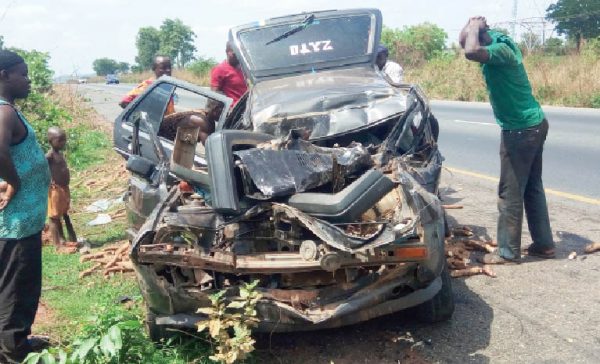 Accident scene where three persons sustained injuries after their car rammed into the
back of a moving truck at Awawa Village on the Abuja-Lokoja Road on Tuesday night
Three persons were seriously injured when their car rammed into a moving truck on Tuesday night at Awawa Village on the Abuja-Lokoja Road, Daily Trust reports.
A witness said the incident happened at 07:47pm  when a Golf car with registration number KKF 61 XA  loaded with cassava rammed into a DAF truck with registration number XXT 206 XU.
He said the three victims were rescued and taken to the hospital by Federal Road Safety Corps (FRSC) officials.
When contacted, the Abaji Unit Commander of the FRSC, Olasupo Esuruoso, confirmed the crash, saying the three victims had been taken to the Abaji General Hospital.
He added that two persons were also injured in another crash which occurred on Sunday night at Piri Junction on the same road.
According to him, the accident happened around 04;12am when a truck with registration number GLN 01 XA rammed into another moving truck loaded with bamboo sticks and without number plate.
He said the first truck’s driver and one passenger sustained injuries.
Top Stories