Marketers Shutting Down Due To High Petrol Price - DAPPMAN


It was gathered that the government had refused to adjust the pump price of PMS despite increasing the prices which depot owners pay for the product. 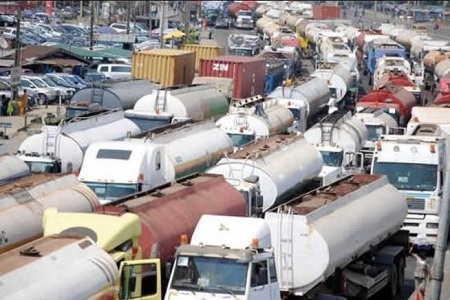 Many oil marketers are closing shop as they are not making a profit due to the high cost of Premium Motor Spirit being sold to them by the Nigerian National Petroleum Corporation, the Depot and Petroleum Products Marketers Association of Nigeria has said.

According to DAPPMAN, a lot of jobs have been lost due to the shutdown of businesses by oil marketers, adding that this may trigger a widespread petrol crisis in the sector if not handled adequately.

The association’s Executive Secretary, Olufemi Adewole, told our correspondent that the increase in the price of PMS by NNPC to DAPPMAN members from N111 per litre to N117 had put a severe strain on the operations of oil marketers.

Adewole stated that most marketers were not making a profit and when asked why they had remained in the business of PMS sale despite incurring losses, he replied, “There are margins for the dealer, retailer, etc, and it is from the addition of these margins that a depot owner works out his income.

“If those margins cannot cover my cost viz-a-viz landing cost of the product,  that means it is not profitable. For instance, as of May 11, 2019, or around that time, the landing cost of PMS was over N200 per litre. Now you are telling me to bring in a product which sells above N200 and you want me to sell at N145.”

He added, “If that happens, who bears the cost of the difference between N200 and N145? These are the issues. Also, the foreign exchange concern is there, as the rate of the United States dollar is different when you check the official rate at the CBN and the unofficial rate out there.”

He stated that the government had refused to adjust the pump price of PMS despite increasing the prices which depot owners pay for the product.

Adewole said, “When we were buying it from them at N111 per litre, the pump price of PMS was N145 for a litre and when they increased it to N117, they still maintained that the pump price should be N145. Now, who bears that difference between N111 and N117?

“I want you to know that the number of marketers operating in the downstream sector has been decreasing annually since 2016. I’m not talking about people who just have offices, rather I mean petroleum product marketers who bring in or buy products and sell. This is why the sector should be deregulated.”

On whether marketers would vacate the petroleum product business should the government fail to deregulate the sector, the DAPPMAN executive said, “If I say 100 marketers were operating last year and now it is only 10 that are operating, where have the remaining 90 gone?”

Our correspondent further learnt from sources at the Major Oil Marketers Association of Nigeria that many major oil dealers were also recording heavy losses. The major oil marketers in the sector include Forte Oil, Oando, Total, Conoil and MRS.

When contacted, the spokesperson for the NNPC, Ndu Ughamadu, said the corporation did not effect any recent increase on the ex-depot price of PMS and that there was no plan to increase the pump price of the product.

He, however, did not react to the claims by the marketers that they (marketers) were closing shop due to the high cost of the commodity to them.

Also when contacted, a senior official of the Independent Petroleum Marketers Association of Nigeria, Abubakar Maigandi, told our correspondent that DAPPMAN members should confront the government with their demands in order to avoid a crisis in the sector.

He said, “The DAPPMAN people are not selling exactly the way it should be sold because the ex-depot price that they are meant to sell to us is supposed to be N133.28, but they are selling it at N133.4 and N133.5. What they pay for the product when buying from NNPC is not up to N120, although there are other things they do as well.

“However, if that cost from the NNPC is high for them, then they should meet the government about it, because as independent marketers, if we sell above N145, people will start complaining.

“So, if they know that they are not contented with the price, they should tell the government to give them the right price, not to pass it to us when we can’t sell above N145.”
Top Stories