Okon narrated that the boy was playing football with his friends when their ball was kicked into the drain. 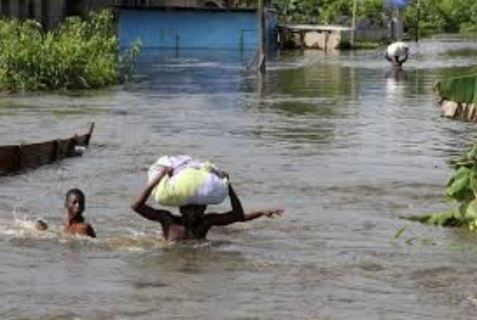 File Photo
A three-hour torrential rain in Calabar, the Cross River capital, has swept away a 15-year-old boy. The Tragedy occurred during the heavy downpour on Tuesday evening.
An eyewitness who gave his name as Anthony Okon said the unidentified teenage boy was washed away by the heavy flood that poured down in the metropolis.
“The heavy water flew through drainage around the Judges’ Quarters at Ekorinim, Calabar Municipal local government area,” he said.
Okon narrated that the boy was playing football with his friends when their ball was kicked into the drain.
“The boy fell inside the gutter and all attempts to find and rescue him proved abortive.”
He appealed to government to ensure that all big culverts are covered to avert a recurrence.
The eyewitness said culverts emptied their water into the Marina beach which in turn empties into the Atlantic Ocean. The fear, according to him, was whether the body of the teenage boy is at the perimeter of the city or the ocean.
“Apart from government doing something about these big drainage and culverts, parents should also hold their children.”
Okon warned parents against allowing their children to play during heavy down pour, stressing that, “many have died when heavy rain poured”.
It would be recalled that in 2016, a teenager (better known as Skolombo boy), was drowned at Atu Street drainage while playing with friends in a similar manner.
Top Stories