In what will come across as a really shocking development, a security guard has reportedly killed his colleague for ritual. 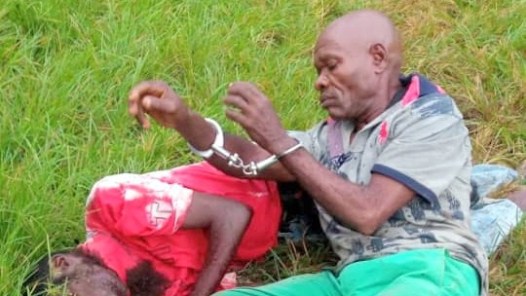 Photo credit: Premium Times
According to a report by Premium Times, a private security guard employed by the management of the Lagos State Polytechnic (LASPOTECH), Ikorodu, Cletus Wilson, on Friday, allegedly murdered one of his colleagues, John Okoro.
The management of the polytechnic and the police have confirmed the development.
Witnesses told Premium Times that Mr Wilson had attempted to escape shortly after committing the crime, but other security guards on the campus chased and caught him.
They immediately reported the matter at the police station along Ikorodu-Sagamu Road, and its personnel visited the scene where Mr Wilson was handed over to them.
According to a witness, who requested anonymity, Mr Wilson had confessed to the police that he hit Mr Okoro on his neck with a heavy metal before he later slaughtered him with cutlass.
“Very early on Friday we heard the noise on campus that another person had been killed by one of the security guards. It was after we moved near the scene of the incident that we saw how gory the whole thing is,” the witness said.
“Okoro is the guard at the Chemical Engineering Department while Wilson works at the Computer Engineering Department. After slaughtering his victim, Wilson also cut his hands. He was about to escape with the body parts before he was caught in the bush by other security men. He was handcuffed by the police and his photograph taken as he sat beside the corpse on the open field where the corpse was deposited.”
Speaking on the development, the polytechnic’s spokesperson, Olanrewaju Kuye, said both the victim and the alleged culprit are members of the outsourced security operatives engaged by the school.
He said; “The report of the murder case is true. The two of them work for Kramoo Securities, a private company, which supplied them to the school. We have since reported the incident to both the police and the security company.
“We are aware it is for ritual purpose but the police would unravel the details in their investigations.”
The divisional police officer in charge of the police station, Adekunle Omisakin, in a telephone conversation with PREMIUM TIMES, said the matter is currently being investigated by his station.
“Yes, there was a murder case on the campus this morning and the alleged culprit is in our custody,” Mr Omisakin said.
Top Stories