Revealed: How Navy Illegally Detained Civilians For Over Two Years


The navy has been accused of detaining some civilians without trial for over two years in a new report. 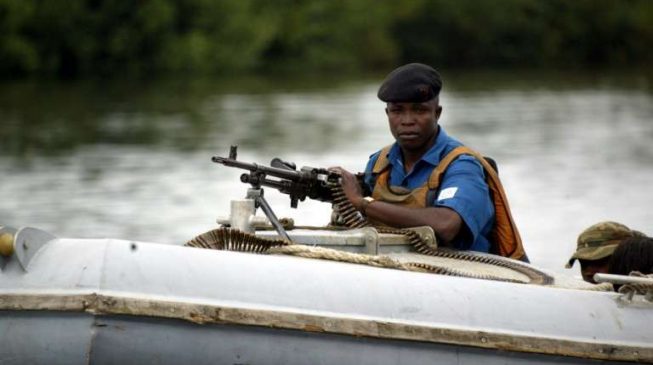 The scale of detentions without trial by the Nigerian navy is far bigger than previously reported as new facts continue to emerge, TheCable can report.
Most of the arrests were carried out over suspicion of illegal bunkering — selling oil on the high seas without licence — and allegations of oil theft.
However, the suspects are supposed to be handed over to the appropriate authorities — such as the police and the Economic and Financial Crimes Commission (EFCC) — for trial.
TheCable has learnt that not only has the navy continued to hold suspects without trial, there is emerging evidence that the number of those being held indefinitely might be in hundreds.
The naval authorities have continued to ignore requests from TheCable for information on this development.
DETAINED FOR TWO YEARS
In February 2017, a vessel named Singapore Inspector was arrested in Lagos with the crew members identified as Fasanya Oladele Samuel, Raji Taofik and Fatunmbi Akinkunmi James.
Also on the list are: Paul Obi, Grace Inyang, Emmanuel Eze, Ogberugba Odafe, Emomotimi Festus, Firstman Job, Sokaribo Nelson, Akpoviri G. Ebbah, Sikiru Adekoya, Okechukwu Victor and Olajide Enigbewo.
Femi Falana, human rights lawyer who has taken up the issue with the naval authorities, told TheCable at the weekend that he understood as many as 67 civilians are currently being detained at NNS Beecroft, Apapa, Lagos state.
Another vessel, MT Adeline Jumbo, was arrested and the crew are being detained at NNS Beecroft in Apapa.
The detainees are: Adeleke Adewale Hameed, Onaja Reuben, Labinjo Kehinde, Innocent Apkan, Emmanuel Oputa, Peter Dung and Pius Paul Matthew.
GROWING LIST
Two weeks ago, 20 civilians were also moved to the NNS Beecroft detention centre.
Another batch of 14 suspects were detained after Neso 2 was arrested by the navy.
The names of the detainees, as released by Falana, are: Melvin Jack, Adebayo Mayoma, Francis Onyeama, Godwill Umoh, Bosin-Miebaka Iyala, Edu Fidelis, Richard David, Daniel Harrison, Asaiki Okeoghene, Omogoye Bolaji, Victor Uchendu, Oloyede Ademola, Simon Onyisi Mike and Udom Victor Jerome.
Before the latest revelations, Falana had urged President Muhammadu Buhari to order the release of 40 Nigerians from “illegal custody” of the navy.
TheCable had also reported earlier how the detainees including Dada Labinjo, a navy captain, and Sherifat Ibe Lambert (also known as Mrs Bola Labinjo), a lt. commander, have been in detention since September 2018 for an undisclosed offence.
***
Source: TheCable
Top Stories