Denying the allegation, the Area Commander added that the flags recovered excluded torn and worn out ones that were not counted. 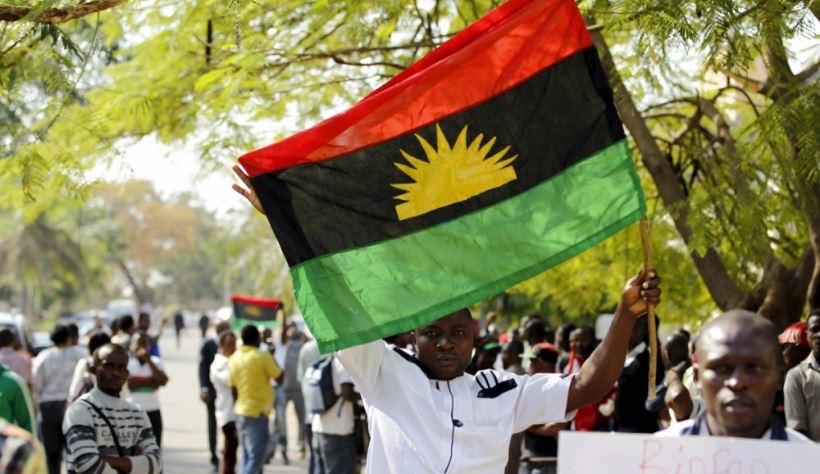 File Photo
No fewer than 555 Biafran flags and other insignia that included belts, caps, shirts, books, fliers, stickers and a car were recovered during the clampdown on banned Biafran agitation group members in Onitsha, Anambra state, by the Joint Taskforce, JTF, that included the police, military, Civil Defence Corps, Federal Road Safety Corps, among others.
This disclosure was made by the Onitsha Police Area Commander, Mr John Obuagbaka, while reacting to speculation in some quarters that the Police in Onitsha beat up, extorted and forced residents into their waitng vans in the name of clamping down on Biafran agitators before, during and after celebration of Biafran day by both Biafran Independent Movement, BIM and Indigenous People of Biafra, IPOB.
Denying the allegation, the Area Commander added that the flags recovered excluded torn and worn out ones that were not counted.
According to him only members of the banned groups were arrested adding that, “it was on the course of pulling down the flags hoisted on electric poles along Obodoukwu road and other strategic positions by the banned groups that the JTF saw a blue car packed along Obodoukwu road and loaded with MASSOB flag and other insignia, that we opened the car where these insignia were recovered”.
On the allegation that #648,040 left in the car by the owner, Comrade Michael Ezeogbonna, was among the items removed by the JTF led by himself, the Area Commander said that no such money was removed and described the allegation as funny and unfounded adding that whatever that were recovered from the car were recorded in the presence of all security operatives that made up the JTF
He advised Ezeogbonna, a welder and an activist, to come forward to the police to clear himself pointing out that he has the freedom to express and defend himself.
Earlier, Comrade Ezeogbonna accused the JTF of forcefully breaking his car door and removing MASSOB insignia in the car without his consent.
Admitting that he is a member of BIM-MASSOB, Ezeogbonna stated that, “I heard they also towed the car to the Police Area Command, that means the battery to start the vehicle is either removed also or that they may have caused some major electrical problem that made them to tow it, thouth I have the key with me”
“They should return my car to where I packed it in my workshop along Obodoukwu road where I normally pack it. MASSOB is not a terrorist group and I did not commit any offence that will warrant the breaking and entering of my car by the JTF” he posited.
In a swift reaction, the BIM-MASSOB image maker, Mazi Chris Mocha, said that “the raid on Obodoukwu road, Upper Iweka axis, all in Onitsha and environs by the JTF who also beat up innocent people and forced them to climb up electric poles and pull down Biafran Flags hoisted on the poles is inhuman and unethical.”
“We condemn in totality the arrest of our members in Onitsha by the JTF, it is also unethical of the Onitsha Police Area Commander who led the taskforce, to forcefully broke and towed the car of our member, Michael Ezeogbonna, to his office for no just cause rather than that they saw Biafra flag in his car”.
“We are not a terrorist group but a non – violent body struggling to realise a Biafran state because of Imagination of the Igbo nation by the Federal Government of Nigeria” he stated further.
Top Stories