The Switzerland defender has posted an emotional goodbye on social media as he leaves north London after just one season. 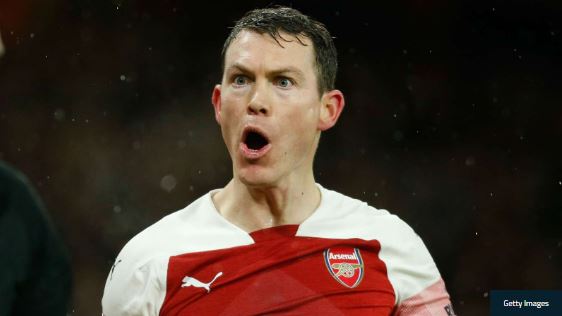 Stephan Lichtsteiner
Stephan Lichtsteiner has confirmed he is leaving Arsenal after just one season at the Emirates Stadium.
The 35-year-old became Unai Emery's first signing as Arsenal manager when he joined the Gunners on a free transfer from Juventus last summer, going on to make 23 appearances in all competitions.
The former Lille and Lazio defender was mainly used as a back-up, with the majority of his starts coming in the Europa League and domestic cup competitions.
A season-ending injury to Hector Bellerin in January presented Lichtsteiner with a first-team opportunity but he ended the campaign behind Shkodran Mustafi and Ainsley Maitland-Niles in the pecking order, starting just two of the Gunners' final 18 games.
He was an unused substitute in the club's final match of the campaign, a 4-1 thrashing by Chelsea in the Europa League final that not only ended their hopes of silverware but also of Champions League football next season after a fifth-placed finish in the Premier League.
In a message posted on Instagram the Switzerland international thanked the fans, his team-mates and club staff while expressing his disappointment at their Europa League final defeat in Baku.
"Dear Gunners, we were close to add an important chapter to this amazing club’s history. But to be close is unfortunately not good enough. This is hard to accept," said Lichtsteiner.
"I’m very disappointed. It was our objective to bring Arsenal back on the highest international level and to win trophies. Both belong to this great club. I wish my teammates, my coach and his staff, all hard-working employees and all Gunner fans simply the best!
"I’m confident our team can complete our mission next season! I loved to be a part of this club. ‘It was a great challenge and experience without a happy end, unfortunately. Thank you very much for your overwhelming support! It was much appreciated!"
He becomes the fourth high-profile player to confirm their departure from Arsenal this summer, with Aaron Ramsey and Danny Welbeck both also leaving on free transfers while Petr Cech has retired.
Lichtsteiner began his career at Grasshoppers Zurich in 2001 and had spells at Lille and Lazio before joining Juventus in 2011.
He would go on to make more than 250 appearances for the Bianconeri winning 14 major honours, including seven successive Serie A titles.
Top Stories