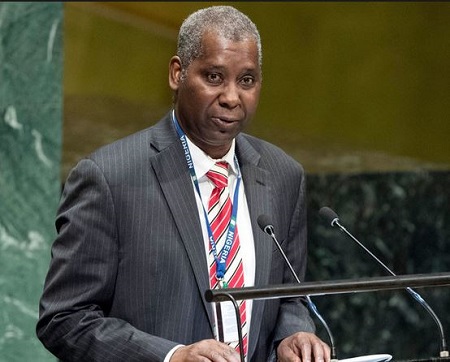 Following the election, Muhammad-Bande will be taking over from Ecuadorian politician and diplomat, María Fernanda Espinosa Garcés, President of the 73rd United Nations General Assembly in September, 2019.

“It is my pleasure to congratulate Professor Tijjani Mohammad-Bande as President of the 74th session of the United Nations General Assembly. From your years as Permanent Representative of Nigeria, you know the United Nations well,” Guterres said.

Guterres further said being a Nigerian and African, he was sure Muhammad-Bande understood the challenges facing the African continent, including the entire world.

“As a Nigerian and an African, you have invaluable insights into the continent’s challenges – such as the Sahel and Lake Chad basin – and more broadly into the challenges our world faces across the three pillars of our work, peace, sustainable development and human rights,” Guterres added.

Guterres further said Muhammad-Bande would be in office as the United Nations geared up to commemorate her 75th anniversary, an occasion that he hoped could be used to reaffirm the value of international cooperation and the vision of the Charter.

Guterres also said September would see a crucially important series of meetings which include the Climate Action Summit and the Sustainable Development Goals Summit, and the high-level meetings on universal health coverage, Small Island developing states and financing for sustainable development.