My Son Cheers For Real Madrid To Annoy His Brother - Messi


The Barcelona star says his three-year-old enjoys winding up several of his family members. 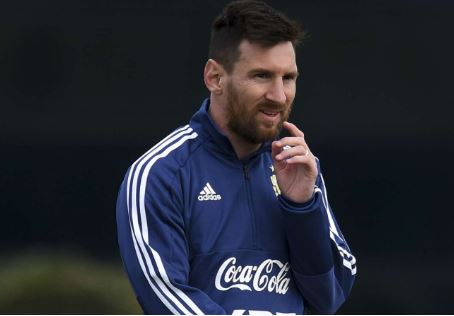 Lionel Messi
Lionel Messi has confessed that his son Mateo cheers for Real Madrid to annoy his brother Tiago.
Mateo, who will turn four in September, chooses to take a contrarian position when it comes to his football allegiance, much to the annoyance of his older brother.
“Sometimes the television is on and he cheers Madrid’s goals. My son Tiago gets annoyed and Mateo cheers them to annoy him,” Messi told TyC Sports.
Mateo's ability to wind up his family members doesn't end with his brother, however, as Messi said his middle son has even made fun of his father over Barcelona's recent collapse against Liverpool in the Champions League.
"We were playing at home and were going for a kick-about. Mateo said to me ‘You’re Barca and I’m Liverpool, because I'll beat you’. He’s got a lot to learn,” he said with a laugh.
Messi is getting ready to represent Argentina at the Copa America in Brazil, but has played down his country's chances of winning the tournament.
The 31-year-old has twice reached the final of the competition, in 2015 and the Centenario edition in 2016, but on both occasions they were beaten by Chile on penalties.
Argentina have contested four of the past five finals but have lost all of them, with their last continental triumph coming back in 1993 in Ecuador.
And Messi is not convinced they will be challenging in 2019, as he believes the squad is undergoing a transition.
"We go with the same excitement as always, but the reality is that Argentina is going through a process of change," he said.
"It's the first official competition for most of them, but it doesn't mean Argentina are not going looking for the trophy. We're not candidates like other times."
Messi admits his is still feeling the frustration of the end to the club season, with Barcelona having seen their treble dreams dashed in the closing weeks of the campaign.
Although they won La Liga, a shock 4-0 defeat to Liverpool in the second leg of the Champions League semi-final saw them crash out of Europe, while they were beaten 2-1 by Valencia in the final of the Copa del Rey.
Despite those disappointments, Messi has been feeling good in the Argentina camp ahead of a friendly with Nicaragua on Saturday.
"I'm more tired and frustrated in my head than physically, most of all because of the elimination from the Champions League," he said. "In the last few years, I've played fewer minutes. I feel good.
"I feel very good. It's a really nice group that's very eager to do things well. It's a very good group, with really good people beyond just the footballing sense."
Top Stories