TV Producer Recounts How SARS Officers Assaulted, Accused Him Of Being A Yahoo Boy (Video)


Nigerian TV producer, Valentine Obilor has revealed how SARS officers assaulted him and accused him of being a yahoo boy. 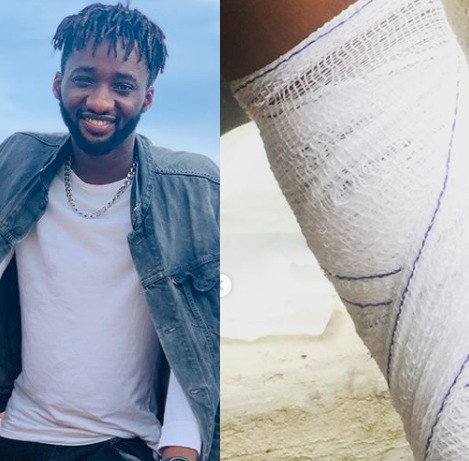 Obilor
The human rights abuse that has characterised the operations of SARS officials has been brought to light once again as TV producer and music artiste, Valentine Obilor, shared his own unpleasant experience with some SARS officers in Lagos state over the weekend.
In a series of videos he posted on his IG page, Valentine narrated how he was accosted by SARS officers along Badore road in Ajah at about 12am and was asked where he was going to. Despite informing them he was on his way to a friend's house for a recording session, the SARS officers demanded to see his phone which he refused.
They used their guns to hit him, beat him up, fractured his hand and accused him of being a Yahoo boy. According to Valentine, the SARS officers said he must be a Yahoo Yahoo boy for wearing dreadlocks.
A visibly angry Valentine wrote: ''(HOW SARS BULLIED ME, FRACTURED MY ELBOW, STOLE FROM ME AND CLAIMED I CANT BE ON DREADS AND NOT BE A YAHOO BOY)
"How dare you attack me because of my hairstyle or my dressing ? How dare you criminalize me because of that ? OPERATION END SARS!!! SARS means SPECIAL ANTI ROBBERY SQUAD , they should attack robbers, armed criminals , they should stop harassing young innocent hardworking citizens .
"Last night was one of the worst nights of my life with this criminals in uniform... If my hairstyle is the criteria for determining if I'm a cyber criminal (yahoo boy) or not, then I'm sorry! The police force needs the highest level of education . I woke up this morning with my hand and head in aches after they had hit me with their gun and at gun point taken me to ATM to withdraw my money(hard earned money) . I av gone to cut my dreads this morning, hope I'm less of a 'cyber criminal ' now right ???
"At first I didn't want to post this video, but if I don't post, how would this badgeless stupid men in uniform be brought to justice or extinguished from our social life ? How?? . God punish SARS!!! God punish them in all totality .. OPERATION END SARS !!!!!???? God punish them ...''
Watch the videos he shared below: