A woman who was learning how to drive has ended up crushing a 72-year-old plumber in the city of Lagos. 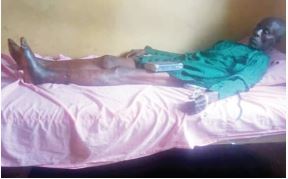 Odamo
A 72-year-old man, Mr Peter Odamo, is battling with a fractured leg after he was knocked down by a woman, who was reportedly learning driving at Ikota Country Home, in the Ajah area of Lagos, Punch Metro reports.
It was learnt that the woman was being taught how to drive by her husband, Mr Sunday Orji, when the accident happened on Saturday, May 18, 2019.
She was said to have lost the control of the vehicle and knocked down Odamo, who was walking by the roadside.
It was gathered that Odamo was returning from his client’s residence in the neighbourhood, where he had gone to wash a water tank.
It was learnt that eyewitnesses wanted to alert the police to the accident, but Odamo restrained them after Orji begged and promised to pay for his treatment.
Odamo was taken to Peninsula Hospital, where he received first aid. The hospital also carried out an X-ray on the leg, which revealed that he suffered a fracture, and recommended a surgery.
It was learnt that Orji paid about N80,000 for the hospital’s services and promised to assist on the cost of the surgery, which was initially estimated at N2m.
He reportedly sent N20,000 to Odamo two days after and stopped reaching out to him.
It was learnt that the septuagenarian was later taken to a private orthopaedic hospital in the state, where the surgery was carried out.
Odamo’s family friend, Mr Wale Adejuyigbe, told our correspondent that the accident was later reported to the police at the Ajah Division, adding that efforts to trace the address on the business card provided by Orji had proved abortive.
The information on the business card indicates that Orji is the Chief Executive Director, SUNORJ Properties Limited, located on Road 9, No 5 Block T29, Admiralty Way, Lekki, Lagos.
Adejuyigbe said, “The man (Orji) was teaching his wife how to drive that day, while Baba (Odamo) was walking along the roadside. She lost control and knocked him down. Some people intervened and he was taken to Peninsula Hospital in Ikota. He was returning from where he had gone to wash a tank when the vehicle hit him.
“The next day, we did not hear from him. On the third day, he sent N20,000 for the victim to be taken to  a ‘bonesetter’. I called him on the phone and asked him to come so we could take the man to the orthopaedic hospital at Igbobi.”
Adejuyigbe said during the telephone conversation, Orji’s wife interrupted and said Odamo did not suffer any fracture.
“She said she was a medic and that Mr Odamo only had a dislocation. When we went to Igbobi, they asked us to raise N750,000 for the surgery. Someone linked me up with an orthopaedic surgeon who charged us N500,000 for the surgery and physiotherapy. He is still on admission at the hospital.
“We begged the doctor that we did not have money. We were able to get N200,000 as part payment for the operation. Thereafter, we have been able to pay additional N90,000. I later went to Ajah Police Station to report the incident.
“We have been trying every means to see Mr Orji. The police invited him but he told them that he did not have time. We tried to locate his office in Lekki but we could not,” he added.
Orji, who spoke to our correspondent on the phone on Thursday, said he had no case with the police.
He said he had assisted in the treatment of the victim, noting that Odamo’s relations could take the matter to court if they were not satisfied.
He stated, “I paid the medical bill at the hospital (Peninsula) and gave Baba N20,000. I was not told he would undergo any surgery. Do they want me to give them N2m or what? They should let us go to court. I think that is the best thing to do. I don’t have anything to do with the police. My wife is not a learner driver. When we get to court and if it is found that she does not have a driving licence, let them jail her.”
A doctor at Peninsula Hospital, who identified himself only as Dr Godwin, confirmed to City Round that Odamo suffered a fracture and not a dislocation.
He said, “We had an X-ray and it indicated a fracture. We did our own part and told the man’s relations that they needed the service of an orthopaedic surgeon. It was not a dislocation. We explained to both parties.”
The Police Public Relations Officer in the state, DSP Bala Elkana, said the case was reported late to the police. He, however, said investigation had commenced.
He said, “It is a case of an accident. They concealed it from the police at first, but we have commenced investigation to look at the circumstances surrounding the incident.”
Top Stories