A little boy has been left in a state of pain and sorrow after his stepmother disfigured him with a hot electric iron. 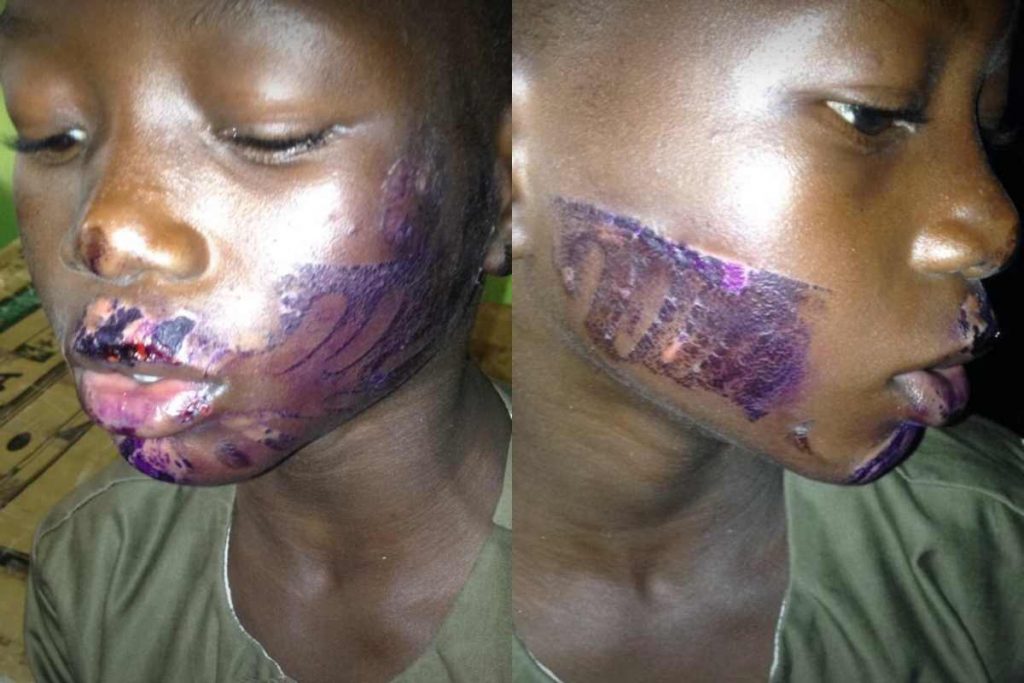 The boy was disfigured by the stepmother
A little boy has had his face disfigured by the stepmother in Lagos state.
It was gathered that the boy identified as Ezekiel Kuti lives with his father and stepmother at Owode onirin opposite old Barack in Lagos before the incident happened.
The stepmother used a hot electric iron to burn the face of the boy over an incident.
A twitter user @Opomulero_007 who shared the story revealed that the stepmother have been maltreating the little boy. He also interviewed the little boy who spilled it all.
According to the boy, the incident happened on the 5th of June when he spilled a gallon of groundnut oil. He tried scooping it and decided to use water to fill it in fear of being scolded.
His step mother noticed this and got upset with him. In the presence of his father, his step mother used a hot electric iron to burn him on his face. When asked if he was taken to the hospital, he said he was not, he was the one treating himself.
He went on to reveal that his father did and said nothing even though he witnessed the incident.
NGO and governmental agencies have been called upon to help save Ezekiel Kuti from the wicked hands of his father and step mother before it is too late.
See tweet and video below:

This is Ezekiel Kuti,he stays with his dad and step mother at Owode onirin opposite old Barack in Lagos,his step mother use hot electric iron on his face pls help repost till @instablog9ja get this.. pic.twitter.com/uvbyXkA1qr

Little Ezekiel Kuti stays with his dad and step mother at Owode onirin opposite old Barack in Lagos, his step mother used hot electric iron on his face according to @Opomulero_007pic.twitter.com/ySQsvBij4o