In what will come across as a rather stunning development, a man has crashed his pastor's car while teaching his girlfriend how to drive. 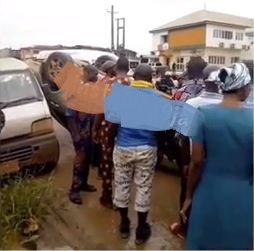 Scene of the incident
A video has emerged online, showing the moments after a man crashed his pastor's car in Lagos.
In the video, the car is seen lying by its side as many people gather round to see what had happened and help the people involved.
According to reports, the unnamed man was driving his pastor's car when he decided to teach his girlfriend how to drive. In the process, he crashed the vehicle. However, how the crash actually happened has not been established at the moment.
Luckily, no one was seriously hurt in the incident as people came to help those involved in the crash.
Watch the video from the scene of the incident below: