The cultists who have been terrorizing residents of the area were apprehended by men of the Ogun State Police Command. 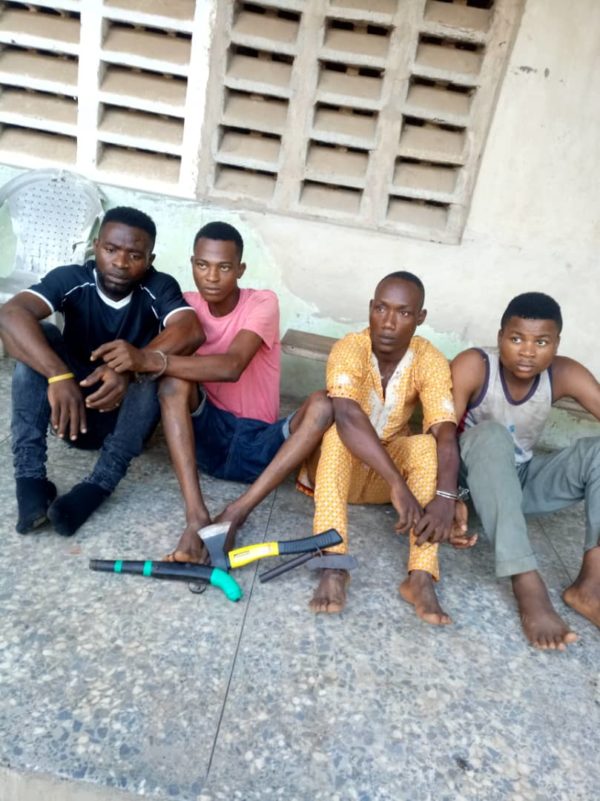 The cultists
Four alleged notorious cultists, Tunde  Olabinjo, 22, Raheem Ibrahim, 28, Tawaq Azeez, 3, and Bisoye Ajayi, have been arrested by the men of the Ogun State Police Command in its avowed commitment to rid the State of violent cult groups.
The suspects were arrested on 8th June, 2019. They were said to be confirmed members of the dreaded Eiye confraternity in Iwesi area of Ijebu-Ode and were arrested while planning to carry out a violent attack in the area.
According to the report by the Police Public Relations Officer, Abimbola Oyeyemi, the arrest of the suspects was as a result of information received by the Command that the Eiye cult group were holding a meeting in a hideout at Iwesi area of Ijebu-Ode, in a bid to carry out a deadly attack in the area.
On receiving the information, the Ogun State Commissioner of Police, CP Bashir Makama, gave a marching order to the officer in-charge of Special Anti-Robbery Squad, CSP Tijani Mohammed, to move into the area in order to nip the planned attack in the bud.
In compliance with the CP’s directive, a team of Special Anti-Robbery Squad (SARS) stormed the hideout where four members of the group were apprehended.
Items recovered from them were: one cut to size single barrel gun, one locally made pistol and one battle axe. The arrested suspects have all confessed being members of the deadly Eiye cult group and that they were planning to launch an attack on a rival cult group within Ijebu-Ode before they were arrested.
Meanwhile, the Commissioner of Police has ordered a serious manhunt for the rest members of the group with the view to bring them to justice.
Top Stories