Collapsed Wall Crushes Labourer To Death During Renovation In Lagos


A contractor handling the renovation project and identified simply as Samson was said to have reported the incident to the police. 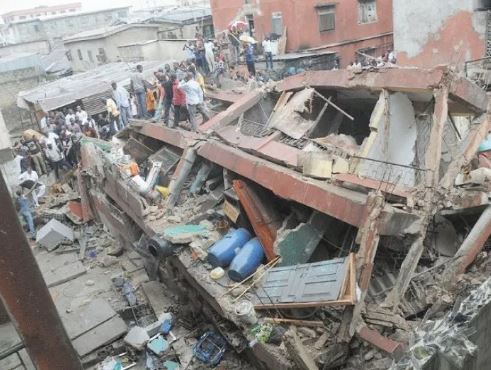 File Photo
A 54-year-old labourer, Shakibu Ajagbe, has lost his life after the wall of a warehouse in Matori Industrial Layout, Lagos, collapsed on him and another labourer, Sherif Balogun, who sustained injuries.
City Round learnt that the victims were doing some renovation work on the warehouse last Friday when the wall suddenly gave way and fell on them.
It was gathered that they were rushed to a private hospital on Ajao Estate, where Ajagbe was confirmed dead.
A contractor handling the renovation project and identified simply as Samson was said to have reported the incident to the police.
A worker at a company around the scene of the incident told a Punch correspondent that the warehouse had been defective for some time.
The worker, who gave his name as Michael, said Ajagbe and Balogun, were at work with two other labourers on the day the incident occurred.
He said, “I was preparing to close from work that day around 4pm when I suddenly heard a bang. By the time I got out to find out what was happening, a crowd had gathered around the warehouse. I learnt that its wall collapsed on two labourers.
“After some minutes, they were rescued from the rubble and were rushed to the hospital. Unfortunately, one of them (Ajagbe) died at the hospital. He was an elderly man. I learnt the warehouse belongs to a freight forwarding company. The structure had been in distress for some time now. The renovation work started few days ago.”
The spokesperson for the police in Lagos, DSP Bala Elkana, who confirmed Ajagbe’s death to a Punch correspondent, said the police had commenced investigation into the incident.
He said, “Around 6pm on Friday, June 7, 2019, one Samson, a contractor, reported that while his workers – numbered about four men – were renovating the warehouse of a company, the wall of the warehouse under renovation suddenly collapsed on two of the workers.

“The workers were identified as Shakibu Ajagbe, 54, and Sherif Balogun, 42. The victims were rushed to the hospital for medical treatment and a police team was dispatched to the scene of the incident. Ajagbe later gave up the ghost. His corpse was removed from the hospital and deposited at the Lagos Mainland General Hospital mortuary.”
Elkana said the other victim, Balogun, was responding to treatment.
Top Stories