A family has begun panicking after their son with down syndrome suddenly went missing in Abuja. 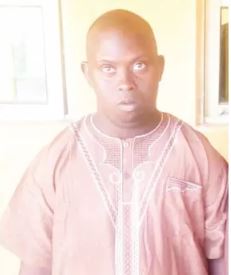 The missing man
An Abuja-based civil servant, Alkali Musa Usman (an engineer) and his entire family have been living in sorrow following the disappearance of their 22-year-old son, Mustapha Alkali Usman, NewTelegraph reports.
The distraught father, who spoke with our correspondent, said that nothing had been heard about Mustafa, since he went missing on May 12, 2019.
Alkali said Mustapha was born with Down syndrome and couldn’t speak. He was last seen between Dakwa and Deidei axis, Kubwa District.
He said: “Since Mustapha went missing, there had been no clue to his whereabouts. We have been living in fear and sorrows. The most painful thing is that Mustapha was born with Down syndrome. He can hear, but cannot talk. He can only answer ‘aye,’ if you ask him where he is going in Hausa. People told us they saw him on that particular day between Dakwa and Deidei, on Kubwa Expressway.”
Alkali said that the matter had been reported at Zuba Police Division, and that signals had been sent to the Federal Capital Territory (FCT) Police Area Command, by old CBN at Garki II.
He added: “We have also contacted family and friends, but no information had been forth coming. We don’t know whether he is alive or not. I cannot explain what we are going through right now.”
Mustapha’s Uncle, Mr. Aliyu Musa, said: “It is indeed a sad moment for the family. The major challenge is that Mustapha cannot speak. We don’t want to believe that he is dead. We’re not sure of what really happened. We don’t know whether he had been abducted, missing or just strayed far from home.

“We’re appealing to members of the public to report to the nearest police station if they see him. He does not attend school because he has speech problem. As it is now, we cannot concentrate on anything because everyone is worried. He needs someone to take care of him.”
Top Stories