A NNPC gas pipeline has exploded on the popular Lagos-Ibadan expressway, sparking serious panic among residents. 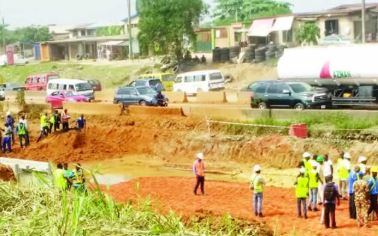 Scene of the incident
According to a report by Punch Metro, tragedy was averted on Tuesday as a gas pipeline belonging to the Nigerian National Petroleum Corporation exploded on the Lagos-Ibadan Expressway.
It was gathered that the incident, which caused panic among motorists, residents and traders around Ibafo in Ogun State, happened when an excavator being used by Julius Berger Nigeria Plc accidentally burst the pipeline.
This caused gas leakage, which resulted in traffic obstruction on both sides of the road.
A project staff member of the Federal Ministry of Power, Work and Housing, who spoke to one of our correspondents on condition of anonymity, said the man who operated the excavator was the hero as he saved the situation.
He said, “We were using an excavator at the time, but we did not know that there is a pipeline running through that area. Suddenly, around 2pm, we heard an explosion, which lifted all of us off the ground.
“Thank God for the operator of the excavator; he is our hero. He was the one who started using his equipment to pour sand on the spot to prevent a fire outbreak. He could have died while trying to save us but we thank God that we did not lose anyone.
“We subsequently stopped the traffic to prevent a fire outbreak and we quickly called the appropriate agencies to put the situation under control.”
When one of our correspondents visited the area, it was observed that the affected area was temporarily cordoned off to Lagos bound motorists.
One of the residents, Omodasola Iyaniwura, pleaded that the leaking pipeline should be fixed as soon as possible.
She said, “When we heard the explosion, we all took to our heels. Afterwards, we started experiencing peppery feeling in our eyes. We started praying to God to have mercy on us. We were all in a state of panic until the valve was closed from a substation.
“It shouldn’t take them up to one hour to fix the problem, but in Nigeria as we know it, it may take up to one week. We are just imploring them to fix the pipeline as soon as possible to prevent a fire outbreak.”
The Federal Road Safety Corps, Ogun State Command, said it had contacted the NNPC to attend to the leakage and minimise the impact.
The Sector Commander, Clement Oladele, said the closed sections of the road had been reopened to traffic, assuring motorists that the FRSC rescue team would remain in the area to ensure free flow of traffic.
He also enjoined motorists to cooperate with the FRSC and other traffic and emergency agencies working to restore the free flow of traffic.
Meanwhile, five suspected vandals have been arrested with petroleum products allegedly siphoned from the NNPC pipelines at Magboro area of the Obafemi-Owode Local Government Area of Ogun State.
The suspected vandals were reported to have siphoned the products in 12 pieces of 50-litre jerry cans and had loaded them in their car before they were apprehended by the police.
The Police Public Relations Officer in the state, Abimbola Oyeyemi, confirmed this in a statement on Tuesday.
Oyeyemi listed the suspects as Akinwale Tajudeen, Isaiah Olalekan, Friday Terry, Mayokun Raheem and Godwin Igho.
He said they were arrested by men of the state police command on Sunday.
Oyeyemi stated, “The suspected pipeline vandals were arrested around 6pm, while the Divisional Police Officer, Ibafo Division, SP Abiodun Ayinde, was on routine patrol with his men around the area of his jurisdiction.
“The men were sighted beside the Buildwell Company in a Passat car with number plate, Lagos KSF 710 BM, loaded with 12 pieces of 50-litre jerry cans containing petroleum products suspected to have been siphoned from vandalised pipelines in the area.
“Immediately they sighted the policemen, they jumped down from the vehicle and took to their heels, but were hotly chased and apprehended by the police team.
“Meanwhile, the Commissioner of Police, Bashir Makama, has ordered the immediate transfer of the suspects to the office of the CP’s monitoring team for further investigation and prosecution.”
Top Stories