It was reported that the UK Foreign and Commonwealth Office on Tuesday warned its citizens against traveling to some Nigerian states. 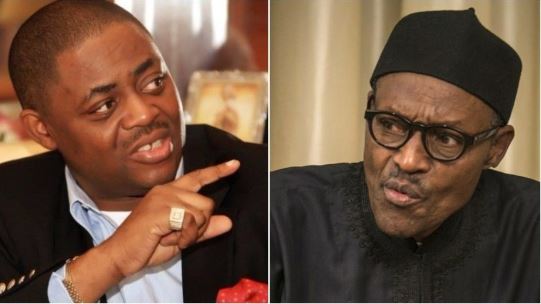 Femi Fani Kayode and President Muhammadu Buhari
Femi Fani-Kayode, former Minister of Aviation has smalled President Muhammadu Buhari over United Kingdom’s travel ban on 24 states in Nigeria
DAILY POST reports that the UK Foreign and Commonwealth Office on Tuesday warned its citizens against traveling to some Nigerian states.
A statement on the UK government website said all travel to Borno, Yobe, Adamawa, Gombe, Delta, Bayelsa, Rivers, Akwa Ibom, Cross River States and 20km of the border with Niger in Zamfara State should be cancelled.
The FCO warned against all but essential travel to: Bauchi, Zamfara, Kano, Kaduna, Jigawa, Katsina, Kogi and within 20km of the border with Niger in Sokoto and Kebbi States, non-riverine areas of Delta, Bayelsa, Rivers and Abia States.
It added that: “Terrorists are very likely to try to carry out attacks in Nigeria. Most attacks occur in the northeast, particularly in Borno (including central Maiduguri and along access routes connecting the city to other major towns and along the Niger border, including in Damasak), Yobe, including the eastern LGAs bordering Borno State both north and south of the Damaturu road), and Adamawa States.
“There have also been significant attacks in Gombe, Kano, Kaduna, Jos and Bauchi States and in the Federal capital, Abuja. The terrorist threat across eastern Yobe and Borno State is high, with frequent recent attacks. Terrorist groups carried out attacks in North East Nigeria during the February 2019 election period, and further attacks are likely. We continue to advise against all travel to Borno and Yobe States.”
Reacting, Fani-Kayode called out President Muhammadu Buhari and his supporters for the recent development.
On his Twitter page, the former minister, who is a critic of Buhari administration wrote: “Insecurity: UK imposes travel ban on 20 states in Nigeria.
“Finally this is what it has come to. Buhari and his supporters should clap for themselves!”
Top Stories