The young lady killed herself after taking a deadly substance in her hostel room in Benin. 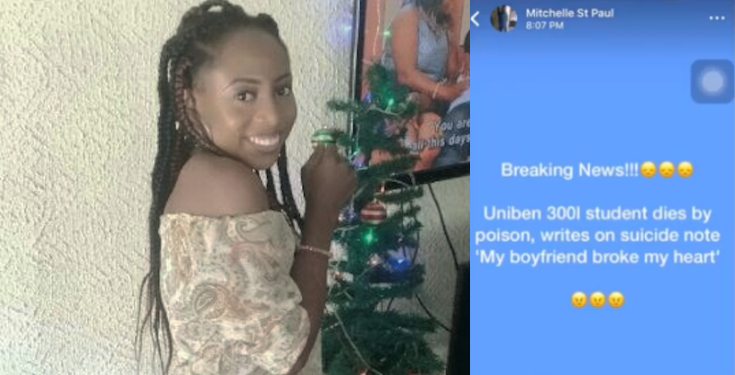 Christabel
A 300-Level Medical Laboratory student of the University of Benin (UNIBEN), Christabel has reportedly taken her own life in her hostel room at Newton Street, Ekosodin area of Benin City, after allegedly taking some deadly substance to end her life.
The sad incident took place yesterday.
It was gathered that she mixed the deadly insecticide popularly called Snipper with a Sprite drink and reportedly left a suicide note where she stated that she was about taking her life because the guy she loved didn’t love her in return after he broke up with her.
But another witness who confirmed the incident said an empty sachet of Klin detergent was found on the spot where her body laid.
Meanwhile, in a social media post by UNIBEN Metro, it was reported that the suicide note, which is already in custody of the police at Ugbowo police station, was addressed to two persons, names withheld and the two persons have been invited to the police station for questioning.
The post claimed the suicide was not due to relationship problems between the deceased and her boyfriend but rather personal unresolved issues between the two persons the letter was addressed to.
“The letter didn’t state what happened between the two mentioned persons, reason the police have invited them to unravel the reasons behind the deceased’s action,” the post stated.
Watch the video below: