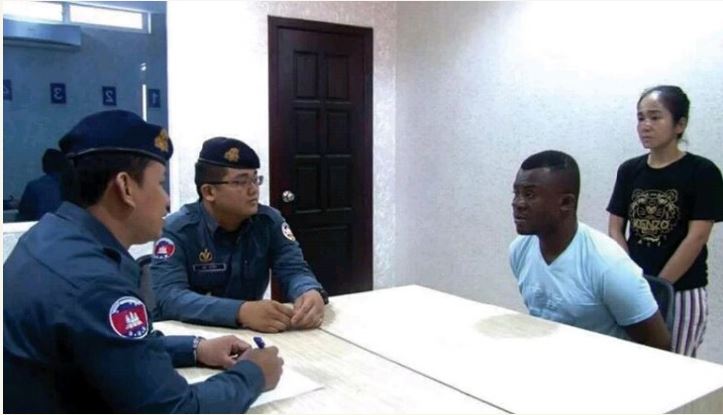 The suspects
Phnom Penh Municipal Court on Monday, charged and detained a Nigerian national and his Cambodian girlfriend for fraud after the couple cheated money out of a victim by using a fake online profile.
Major Ly Sopheak, a municipal military police official, identified the two accused as 31-year-old Nwosu Martins and his girlfriend, 35-year-old Kan Kalin. Both lived in a rental house in Chamkar Mon district’s Boeng Tumpon commune.
Maj Sopheak said that they were charged with fraud and face up to three years in prison if convicted. He added that they were arrested by municipal military police last Tuesday in Por Senchey district after they allegedly cheated a 34-year-old woman out of nearly $4,000.
Maj Sopheak said that in February, Mr Martins created a fake profile using the name “Jerry Snow” and a photo of a foreigner before sending a friend request to the victim. Maj Sopheak added that after the victim accepted the request, Mr Martins started talking to her, telling her that he was a US soldier based in Afghanistan and is set to retire in 2020.
Top Stories