The police reinforcement team recovered the suspects' weapons and took the injured among them to a nearby hospital. 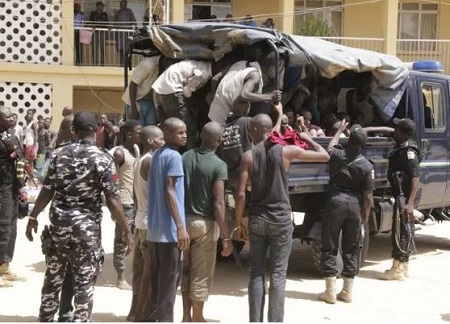 The Police Command in Enugu State said that irate mob had injured members of a gang suspected of vandalising rail lines and robbing residents living around Holy Ghost axis of Enugu.
The Command’s Public Relations Officer, SP Ebere Amaraizu, said in a statement on Wednesday in Enugu that the incident happened on June 17.

Amaraizu explained that residents descended heavily and inflicted injuries on the hoodlums shortly after they allegedly robbed a woman of her valuables.

“It was gathered that one of the hoodlums later identified as Ebube Egbo of Amuri community in Nkanu West Local Government Area and other gang members had engaged plain-cloth operatives on surveillance duties at the rail line with guns and matchetes.

“However, luck ran out of them as irate mob descended heavily on them before the arrival of reinforcement team from Central Police Station, Enugu.

“The suspected hoodlums were critically injured by the irate mob, who had sworn to assist the police end rail line vandalism and robbery incidents,’’ he said.

The police spokesman said that the police reinforcement team recovered the suspects’ weapons and took the injured among them to a nearby hospital, where one of them was later confirmed dead by a doctor on duty.

Amaraizu said that one of the surviving but injured hoodlums, Egbo, had been helping police operatives in their investigations.

It would be recalled that the state Commissioner of Police, Mr Sulaiman Balarabe, had earlier directed for a full scale patrol and surveillance of the rail line axis following complaints of robberies.

Police operatives had embarked on aggressive surveillance and patrol of the axis with a view to unmask those behind the crimes.