A very notorious kidnap kingdpin in the habit of terrorizing Katsina people has been nabbed along with others. 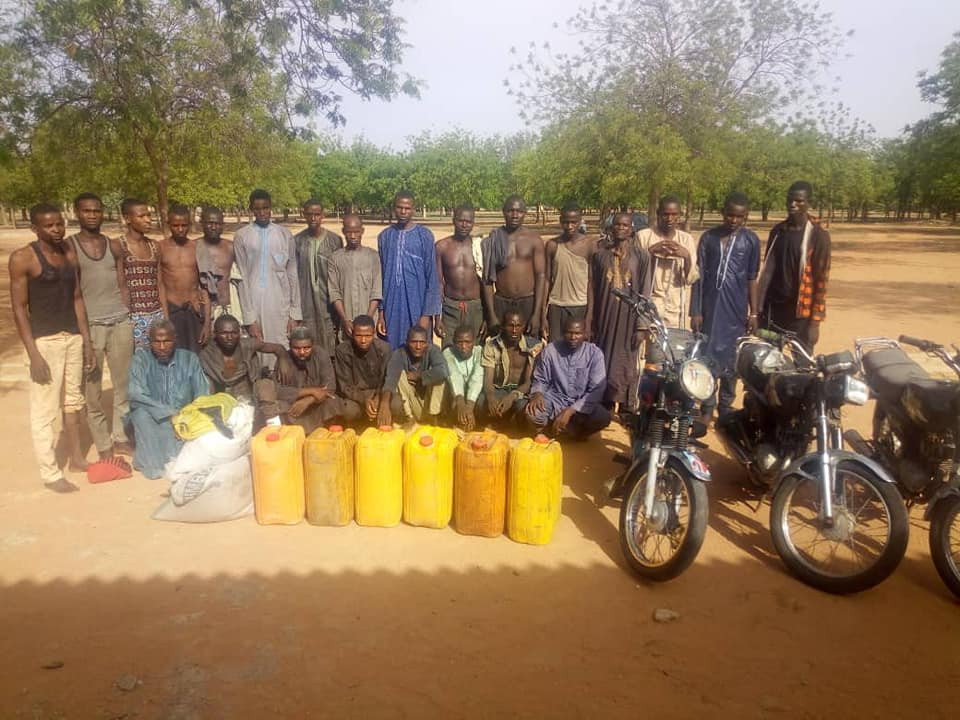 The arrested kidnappers
Troops of 17 Brigade on Operation HARBIN KUNAMA III, have arrested a notorious kidnapping kingpin, one Mallam Bawa Gomna and 20 others during operations around Batsari, Jibia and Safana local government areas of Katsina State.
The success recorded was in continuation of operations against armed banditry, kidnapping, cattle rustling and other forms of criminal activities in Katsina State.
A statement released by Acting Director, Army Public Relations, Colonel Sagir Musa disclosed that those arrested so far are reportedly responsible for terrorizing villagers in Batsari, Jibia and Safana Local Government Areas of the State.
“The criminal elements were apprehended based on credible intelligence from the locals and have confessed taking part in several banditry activities, cattle rustling and other sundry crimes.
“They, as usual, will be handed over to the respective law enforcement agency for further action.
“The 17 Brigade Nigerian Army, commends and appreciates all those that provided the information that led to the arrest of the criminals and urged members of the public to continue to support security agencies with credible information in order to combat the insecurity”, the Spokesman appealed.
According to Colonel Musa, during the operations, troops have recovered motorcycles, foodstuffs, handsets and jerricans of Premium Motor Spirit (PMS) from the bandits.
Those arrested are:
1. Bawa Gomna of Garin Waiziri in Safana LGA.
2. Mallam Bello Sabiu of Fafara village of Jibia LGA.
3. Ibrahim Umar of Fafara village, Jibia LGA (Serials 1- 3 are logistics suppliers of the bandits).
4. Mallam Ibrahim Labo of Shamushelle village in Birnin Magaji LGA, Zamfara State.
5. Musa Lawal of Maitonga village in Safana LGA.
6. Mallam Adamu Mohammed Mairuwa village, Faskari LGA
7. Ibrahim Babangida Mairuwa, Faskari LGA
8. Sani Adamu Mairuwa village Faskari LGA
9. Yusuf Abubakar – Mairuwa village, Faskari LGA
10. Adamu Saidu – Mairuwa village, Faskari LGA of Katsina State to mention a few.
Top Stories