A man who was stabbed by his wife over an incident has opened up on what really happened. 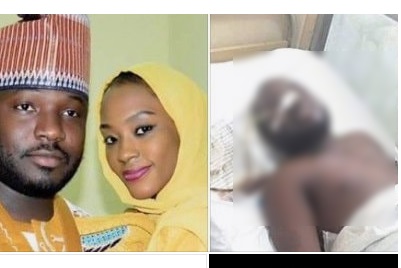 The couple
Saeed Hussein, the Nigerian man who was reportedly stabbed by his wife of 6 months in Kano last week, has shared his side of the story.
The couple made news over the weekend after photos of an injured Saeed surfaced online with claims that his wife of just 6 months, Hana, stabbed him.
Man whose wife stabbed him in Kano shares his side of the story.
In a story shared on Facebook by a journalist, Saeed reportedly shared his own side of the story with some journalists who visited him at the Aminu Kano Teaching Hospital where he is receiving treatment for the stab wounds as shared by Facebook user Mansur Salisu.
"Malan Saidu narrated that he lives in Kano with his wife while he works in Zamfara, he narrated that the girl never liked him but her mother insisted on the marriage therefore he agreed with the hope that after the wedding she may develop the love for him. He debunked the story that he serially molest her during the six month of the marriage. He also debunked the story that he didn’t want her to get pregnant as claimed by her family members.
He went ahead to say that he got an authentic information that his wife brings men to his house whenever he is away for work, according to him the lady connived with 2 of his security personnel to perpetrate the act. As a result of these, he immediately sacked the security guys, seized all her phones and employed another set of security men.
On the fateful day, he said he was sleeping when she attacked him with a knife on his abdomen which resulted in causing serious internal injury, he quickly rushed her trying to get hold of the knife, the struggle was what made her get some bruises and even got her clothes torn.
He rushed and shouted at the security guy to lock the gate to prevent her from leaving the house and called some of his neighbors to help take him to the hospital cos he was seriously bleeding.
He further added that there is CCTV camera which has recorded the incidence for investigation purposes. He however maintained that he still loves his wife and attributed the incidence to fate. The victim is still repercurating at Aminu Kano teaching hospital. Allah ya kyauta" 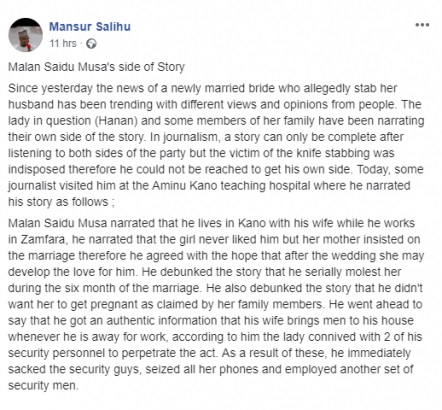