Both Pogba and Neymar are reportedly seeking a move away from their respective clubs. 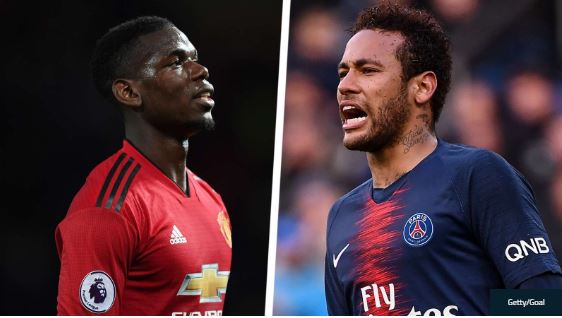 Paul Pogba and Neymar Jr
Man Utd executive vice-chairman Ed Woodward turned down the possibility of swapping Paul Pogba and Neymar, reports The Independent.
The French champions approached the Manchester club about a proposed swap deal, but Woodward rejected the idea.
Both Pogba and Neymar are reportedly seeking a move away from their respective clubs.
Romelu Lukaku will not force through a move away from Manchester United this summer, reports ESPN.
The Belgian striker is being linked with a switch to Serie A side Inter, but he is prepared to stay at Old Trafford if the Red Devils block a path to the exits.
Manchester United will demand at least €60 million (£54m/$68m) from any sale of Romelu Lukaku, claims Gazzetta dello Sport.
The Red Devils are reluctant to make a loss on the Belgian striker, but may dip to that figure as Inter step up their efforts to put a deal in place.
Arsenal have been told that they must break Celtic's club record in order to sign Kieran Tierney.
The Gunners have already had two bids rejected for the Scottish international and, according to the Evening Standard, must break Celtic's transfer record if they are to have any hope of signing the left-back this summer.
AC Milan have started talks with Arsenal over Uruguay international midfielder Lucas Torreira.
Sportmediaset say that the Serie A club would like to take the Gunner, who only signed for the club last year, for an initial two-year loan period, with an option to buy.
The loan fee would reportedly be up to €8m with the full transfer costing around €38m (£34m/$43m).
Top Stories