A social media user, Yomi Owolabi who rose from the ranks of a low morale after graduating with a Third Class degree from a higher instition to become a big player in the labour market has shared his story to inspire people. 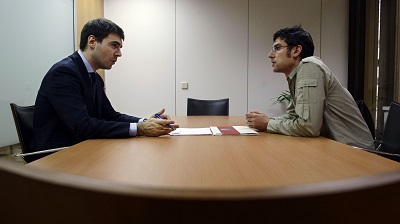 File Photo: Job Interview
I give this testimony to the glory of God and to the shame of the devil. At the end of my university education; through its ups and downs, bitter and sweet moments, I eventually graduated with a third-class degree in computer science.
At that point in my life I was overly disappointed, highly discouraged and even suicidal on my bad days because I knew what was happening in the labour market. Every employer wanted graduates with second class upper and above for the limited and highly coveted employment slots. And here I was, I didn’t even have a 2.2, even if employers wanted to reach out in grace.
I had given my life to Christ on campus, and my thirst for God had intensified during this period. To the glory of God, even with my third-class degree, I did not sit at home as I got a job immediately, which is a whole miracle-story on its own. This job came with great exposure and an intense learning curve for me as a fresh graduate and I embraced the job even though the pay was not fantastic. Those of us who were taken by the company were put through a training programme to initiate us into Business Intelligence and Data Warehousing industry. Time went by and I emerged as one of the brightest trainees through the programme. We were soon staffed and placed on projects for multinational companies. After a while, some of my colleagues started filling out applications and searching for bigger opportunities. They would repeatedly forward job links and vacancies to me as I was considered one of the best among my peers. I did not apply for any of those positions as I was always self-defeated because of my third-class university certificate and the devil held it high up in my face all the time. I continued to do my job diligently and also develop myself in my field.
On Mother’s Day in May 2015, Pastor Nomthi preached about the unmerited grace and favour Moses witnessed in the house of Pharaoh, when there was an order to kill every male child of the Israelites. She said that Moses was not only spared but was raised as a prince. I immediately keyed into this lesson of grace and I was full of faith. I applied for a job someone had recommended me for and I was offered the position on the spot with 100 percent increase with good pension and sumptuous packages.
I thought I had seen all. Before the resumption date I was given, I was invited for another job interview with one of the telecom giants in Nigeria. Through the interview process I had to compete with the best of the best and even more experienced applicants. At the end of the interview and test process which lasted several weeks, I came out top as the preferred candidate of all. Now my problem became choosing between the two offers as they were both fantastic and had good prospects. I sought the face of the Lord who had made all these happen, and eventually I had to turn down the Multi-national Telecom Giant’s offer. Now I am at my new job and I have even been given opportunities to travel to different countries on projects (I had never travelled out of Nigeria before this job).
A month ago, another job offer came through with take-home package closing in on about half a million which I had to turn down after wide consultation and seeking the face of the Lord. I also did not apply for this job; all these opportunities came by recommendation. A third-class graduate now turning down job offers from multinational companies – it can only be God and I am here to give back ALL the praise to HIM alone.
By Yomi Owolabi – Today’s Showers Vol 345 (Fountain of Life Church)
Top Stories