A little girl abducted by kidnappers has been rescued by officers of the Nigerian police in Rivers. 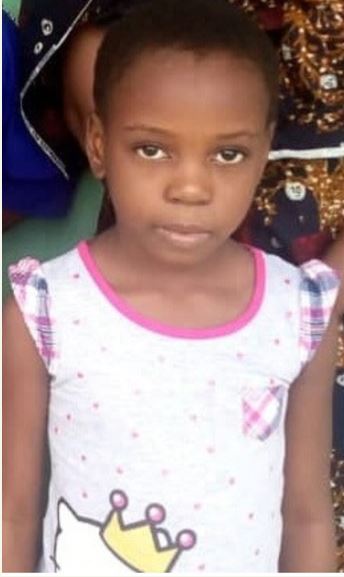 The rescued victim
Detectives attached to the Rivers State Police Command have rescued an 8-year-old girl who was kidnapped in Port Harcourt.
Sofia Ehis was abducted from her parent's house at Nkpor village Rumuolumeni Port Harcourt, on 11th May, 2019.
Meanwhile, operatives of Rumuolumeni Police Station arrested two female suspects in connection with the abduction of Ehis and one other child. The suspects are:
1. Patience Madukwe ‘f’ 50 yrs of Osisioma Ngwa Aba, Abia State
2.Fanno Ukoaha ‘f’ 54yrs of Umuakomamvillage Alaoji Aba, Abia State.
The child is in good health and will be released to her parents as soon as proper identification is carried out.
Police officer, Lyn Iyke, shared photos with Sofia Ehis, describing how the victim was rescued through her detailed and painstaking investivation.
"Jehovah I give You praise ... Thank You my God for using me as an instrument to recover miss Sofia Ehis 8 years child that was stolen at Nkpor village Rumuolumeni Port Harcourt, on 11th May, 2019. God bless the Nigeria Police, The Inspector General of Police, Commissioner of Police Rivers State Command, my DPO SP Sadiq Usman Rumuolumeni Police Station , God bless you my brother Sgt Ogechi Success Njoku for believing in me. God I will forever remain grateful to You for this honour .." 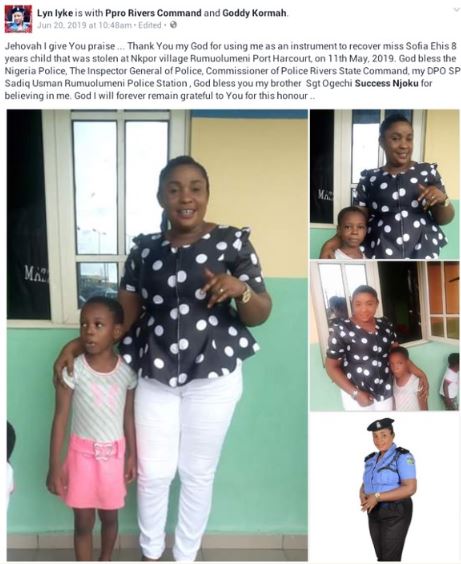