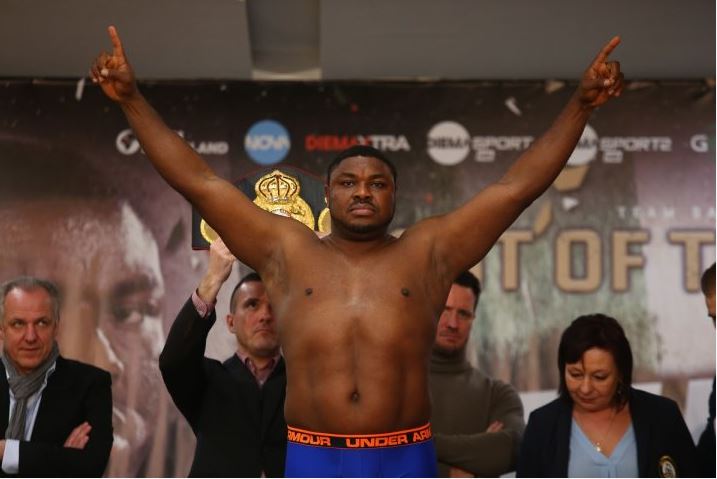 Samuel Peter
Hughie Fury will be facing former WBC heavyweight champion Samuel Peter in a 10 round fight on the undercard of Amir Khan vs. Neeraj Goyat next month on July 12 at the King Abdullah Sports City, in Jeddah, Saudi Arabia. Khan-Goyat will be shown on Channel 5 in the UK.
There’s a big difference in pedigree in this fight. Peter was one of the best heavyweights in the division during his prime a little over a decade ago. You can’t say that Hughie has ever been considered as one of the best heavyweights in the division, and he’s never won a world title like Peter.
#14 IBF Fury (22-2, 12, the cousin of lineal heavyweight champion Tyson Fury, hasn’t done much with his career since losing a 12 round majority decision to former WBO champion Joseph Parker in September 2017. Hughie has won two out of his three fights since the loss to Parker. Fury lost to former heavyweight world title challenger Kubrat Pulev by a 12 round unanimous decision last October in an IBF world title eliminator. 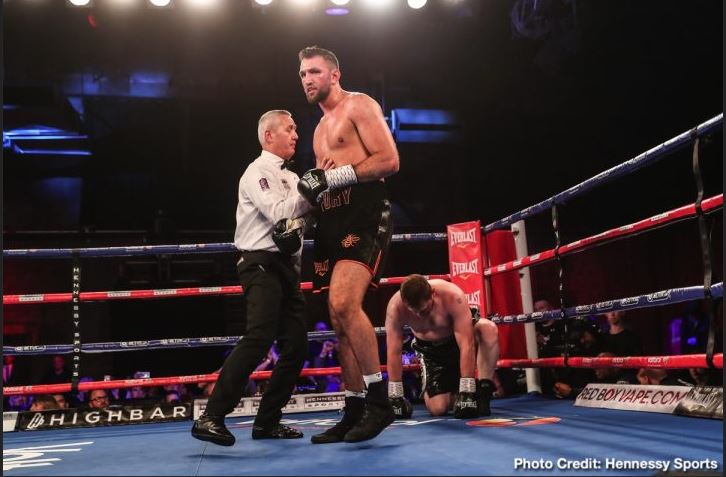 Hughie Fury
Samuel Peter struggling
The 38-year-old Samuel Peter (38-7, 31 KOs) has lost two out of his last four fights since 2016. This isn’t the same powerful ‘Nigerian Nightmare’ Peter that came close to beating Wladimir Klitschko in 2005. That was a much younger and thinner version of Peter, who weighed in the mid-240s. Peter has had weight problems over the years that has limited his success. That’s obviously not the entire reason why his career suddenly went downhill after an eighth round stoppage loss to Wladimir’s older brother Vitali Klitschko in 2008. Peter’s weight has certainly contributed to his problems inside the ring. If he could have kept his weight in the mid-240s his entire career, he likely would have remained a top 15 contender for many years.
In Peter’s last fight against Alejandro Garduno last April, he weighed 286 pounds. At 6’2″, Peter was much too short to be carrying around that kind of weight. It’s unclear how much Peter is currently weighing, but it’s likely that he’ll still be massively overweight by next month when he faces Hughie on July 12.
Since 2008, Peter has lost to Vitali Klitschko, Eddie Chambers, Wladimir Klitschko [rematch], Robert Helenius, Kubrat Pulev and Mario Heredia. Losing to Heredia (16-6-1, 13 KOs) was surprising, because that’s a journeyman level fighter.
Peter’s best wins have come against these heavyweights:
– Oleg Maskaev
– Jameel McCline
– James Toney x 2
– Robert Hawkins
– Taurus Sykes
– Jeremy Williams
– Charles Shufford
Some of those guys would have beaten Hughie Fury if they were in their prime, and still fighting now. It’s difficult to imagine Hughie beating a prime James Toney, McCline, Maskaev or Jeremy Williams. Those guys were a handful for anyone they fought back in their prime. Peter was a good heavyweight when he was at his best 14 years ago. That’s a long time ago unfortunately, but he’s still has good power. If Peter catches Hughie with one of his big shots early on, he’ll knock him out for sure. Peter has incredible power, but he needs to be able to land his shots before he gasses. You can argue that Peter’s stamina is on the level of former heavyweight champion Anthony Joshua.
Peter’s stamina isn’t what it needs to be for him to mix it with the best in the heavyweight division or even against the lesser guys. You can include Hughie among the lesser fighters. Hughie isn’t a true top tier heavyweight, as we discovered in his losses to Parker and Pulev.
Hughie not a sure thing against Peter
Peter still has a lot of punching power, but his weight, punch resistance, and stamina are problems for him. If Peter comes into the fight with Fury weighing in the 270s or 280s, then he’s going to need to land something big early on if he’s to have a shot at winning this fight. Although Hughie is ranked in the top 15 at heavyweight at #14 IBF, he’s more of a second tier level fighter. That puts him in the same class as Peter. That’s why this could be interesting. If Peter is able to connect with one of his big shots on the chin of Hughie, he could poleaxe him in the same way Deontay Wilder dropped Tyson Fury in the 12th round of their fight last December.
Hughie no longer fighting world level opposition
It’s a little sad Hughie no longer facing quality opposition. When Hughie first turned pro, there were some boxing fans that saw him as a future champion. However, Hughie’s one-sided losses to Parker and Pulev showed that he’s not quite world class. Hughie defeated Chris Norrad by a second round knockout last May. Last year, Hughie stopped British heavyweight champion Sam Sexton in the fifth round. Hughie can beat these type of heavyweights without any problems. It’s the good fighters which give the light hitting Hughie problems.
A loss for Hughie would be disastrous for his career, as he would need to think seriously about retiring. Hughie losing to Pulev and Parker weren’t crushing blows to his career outlook, because those guys have more experience than him. But if Hughie can’t beat the shopworn Peter, then it’s time for him to consider hanging up his gloves.
Khan vs. Goyat
In the main event, Amir Khan (33-5, 20 KOs) will be facing Neeraj Goyat (11-3-2, 2 KOs) in a 12 round fight. Khan should easily win this fight. This is a tune-up level fight for Khan against an unknown C-level fighter. Amir needs a good victory in this fight to keep him in the running to face Manny Pacquiao later this year. That’s the fight that Khan badly wants. He’s been chasing Pacquiao for many years, but he’s in position to finally get that fight. Kell Brook is also an option for Khan. It’s entirely up to Khan when he wants to face Brook, because he’s sitting and waiting for him to give him the word.
Top Stories