Venita Akpofure's marriage has unfortunately joined the list of failed marriages of celebrities in Nigeria. 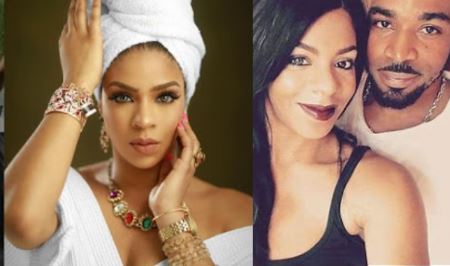 Venita Akpofure
Actress and video vixen, Venita Akpofure's marriage has reportedly crashed due to lack of money and domestic abuse as reported by SDK.
SDK who confirmed that Venita Akpofure's marriage has crashed, further reported that she has already moved out of her husband's home as she was not allowed to work to help in their finances.
An Insider who spilled the beans revealed, "Aside from the frequent beatings she received, there was no money in the home and the kids could not even go to school,they were broke and stuck with each other at home fighting from Morning till night...She was not allowed to work and he could not meet up with the finances and things just went from bad to worse to serious beatings. Family and friends have rallied round her and gave her their support when she became depressed and whilst some friends gave her accommodation, her parents in the UK asked her to send the kids over so that she could find her feet..She has presently moved into her own accommodation after squatting with friends and is now looking for Jobs to survive."
The actress featured in a number of top Nigerian music videos like Naeto C’s single “Finish Work” and Timaya’s single “Shake Ur Bum Bum. She later became the face of First City Monument Bank, Martini Rose and Mouka Foam.
Top Stories