The 2019 All-Star team captain averaged 27.7 points and 12.5 rebounds over 72 games, guiding his side to the Eastern Conference finals. 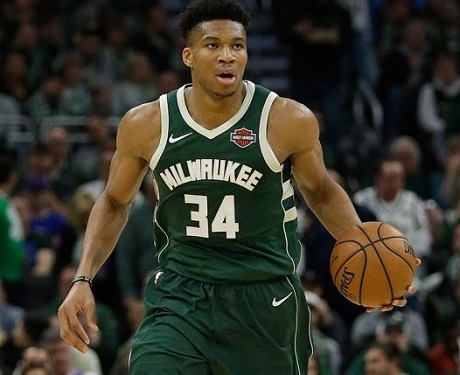 Nicknamed the “Greek Freak”, the 24-year-old Milwaukee Bucks player on Monday got 78 first-place votes, well ahead of the 23 received by fellow MVP finalist James Harden of the Houston Rockets.

“Two, three years ago, I had the goal in my head, that goal [was] to be the best player in the league,” a tearful Antetokounmpo said at the packed awards ceremony in Santa Monica, California.

“I’m going to do whatever it takes to win and I’m going to win MVP. And every time I step on the floor, I think of my dad, and that motivates me to play harder and move forward when my body is sore,” he said, referring to his late father whom he credits for his hard work ethic.

Bucks General Manager John Horst said the recognition was the result of the player’s hard work and dedication as well as his “grace on and off the court”.

Al Jazeera details seven things to know about Antetokounmpo, the epitome of a rags-to-riches story.

1) He is of Nigerian descent
Antetokounmpo was born in Greece’s capital, Athens, on December 6, 1994.

His parents, Veronica and Charles Adetokunbo (Antetokounmpo), immigrated to Greece after leaving Nigeria’s commercial capital, Lagos, in the early 1990s.

Though proud of his Nigerian heritage, the 2.11-metre-tall player opted to play for his native Greece and made his debut for the national team in July 2013, at the FIBA Europe Under-20 Championship.

A year later, he joined the senior team and went on to represent Greece at the EuroBasket 2015.

2) He took Greek citizenship aged 18
Greek immigration laws are such that the children of immigrants cannot apply for citizenship until they turn 18.

Antetokounmpo’s parents were undocumented migrants, which effectively meant that he could claim legal status in neither Greece nor his family’s homeland, making him stateless.

All that began to change when he took up basketball at age 12. By the time he turned 16, it became apparent to local and national scouts that they were dealing with the country’s next sports phenomenon.

“A dream came true. We are now officially Greek citizens, as we felt all these years,” an elated Antetokounmpo said upon his naturalisation in 2013.

3) First Greek to win MVP
Antetokounmpo is the first Greek national to take the coveted honour.

He was also the first Greek player to be selected for an NBA All-Star Game in 2017, garnering 1.6 million votes and coming in third after NBA superstars LeBron James and Kyrie Irving, respectively.

In January 2018, Antetokounmpo earned a starting position in the NBA All-Star Game for the second year in a row.

Antetokounmpo was again selected as starter in 2019 and became team captain for the first time.

4) He didn’t have it easy
His MVP win on Monday capped Antetokounmpo’s astounding rise to the top of the game. The NBA’s best top player grew up in a tough neighbourhood of Athens, sharing a tiny flat with the other members of his poor family.

His immigrant parents found it difficult to secure steady jobs and getting by was a daily struggle.

In fact, only a few years before he was selected by the Bucks as the 15th pick of 2013 NBA draft, the “Greek Freak” and his brother, Thanasis, could be seen in the streets of Athens hawking various products such as watches, hats and DVDs to help their family make ends meet.

“It was tough. We didn’t have a lot of money. But we had a lot of happiness. So we wasn’t broke happiness-wise. When we were struggling back in the day, we were all together in one room, same room. We were having fun. We were smiling,” he told 60 Minutes last year.

5) His nickname isn’t an insult
His versatility is what earned him his nickname.

Whether it’s supporters, sports commentators or journalists, Antetokounmpo’s ability to be – or appear to be – everywhere in the court at all-time didn’t go unnoticed. Being able to play every position – from point guard to centre – he has been consistently leading the Bucks in points, rebounds and assist.

Indeed, despite averaging 27.7 points and 12.5 rebounds per game, Antetokounmpo was also finalist for defensive player of the year, which he ultimately lost out to Utah Jazz centre Rudy Gobert.

Scoring-wise, his career-high so far was recorded in a match against the Philadelphia 76ers in March, logging a staggering 52 points.

Six years after making his NBA debut, Antetokounmpo in May led the Bucks to the Eastern Conference finals, which they lost to subsequent champions Toronto Raptors.

6) There’s (potentially) more like him
Antetokounmpo isn’t the only one in the family to have taken up the sport.

His older brother, 26-year-old Thanasis Antetokounmpo, 26, plays for Greek champions, Panathinaikos, while Kostas, 21, made his NBA debut with the Dallas Mavericks in March.

Their youngest brother, Alexandros, whom Giannis has described as possibly the best among them, also looks set to follow in the elder Antetokounmpos’ footsteps.

The eldest of the boys, 31-year-old Francis, is the only of the Antetokounmpo brothers to have been born in Nigeria.

“I want to thank my amazing brothers,” Antetokounmpo said during his MVP-acceptance speech, tears running down his face. “I love you guys.”

7) Speaking up against racism
In late 2018, Antetokounpo didn’t hesitate to hit back after a presenter of a Greek TV show used a racial slur to describe his older brother, Thanasis.

He took to Instagram to denounce the incident and reiterate his pride in being a Greek-Nigerian.

“My brothers and I are Greek-Nigerian.” he wrote. “If anybody doesn’t like it, that’s their problem.”
Top Stories