Two dangerous and warring cult groups have finally made peace as they sheath their swords to work together. 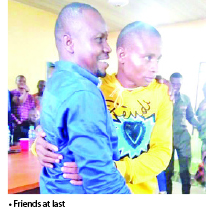 Recently,  two warring cult groups in Ibaa and Obelle communities in Emohua Local Government Area of Rivers State, signed a peace accord, as part of their commitment to the peace and unity in Ibaa. It was not the first.  It was learnt that the communities have had similar agreement twice. This time, the signing was done before traditional rulers, chiefs, elders, women, security operatives and authorities of the local government council. It was done at Ibaa town hall.
In the recent past, several lives had been lost and property destroyed in many years of supremacy wars.  Sources said  the heinous crimes committed by suspected cultists had forced several natives,  who could not bear their atrocities, to flee their homes.
One of the facilitators, Fubara Ohaka, expressed happiness over the peace accord.  He advised the boys not to  allow themselves to be used to cause trouble in the land again.  He also urged them never to go back to their former lifestyle.
Ohaka disclosed that stakeholders in the community and security agencies would monitor the peace with deployment of other strategies to ensure that the peace is sustained.
“By the grace of God Almighty that made it possible for us to gather here today for this peace accord,  I am saying that it would forever come to stay.

“I am saying that all the youths that have signed the peace accord to continue to keep that peace.  They should not allow anybody to use them any longer.  However,  we will follow them step-by-step. We have other security measures to adopt.
“We are going to monitor the youths very well with security agencies and follow up the peace agreement.  I believe it is going to be permanent.  My advice for them is they should lay down their arms and embrace peace forever,” Ohaka advised.
Immediate past Commissioner for Housing, Chinedu Tasie, said the peace move was initiated following threat by  Governor Nyesom Wike-led administration  to withdraw development from communities that are in crisis.  He called on the governor to ensure the completion of Ibaa-Obelle-Rumuji road now that peace has returned to the community.
Tasie noted that  cult-related violence has caused setback to Ibaa community in the last decade.  Many natives, he said, deserted the place and became refugees in neighbouring towns and villages.
“In the past 12 years,  Ibaa has been in turmoil with cult activities almost running entire community to ruin. Ibaa people deserted the community.  They were refugees in the neighbouring towns and villages for all these years.
“At last,  all the warring factions have agreed to lay down arms and live together as a community,  as brothers and sisters without killing each other,  without maiming each other.  And we have resolved to forgive any of them from the past wrongdoings,  and say let ‘bygone be bygone.’
“And from today onward,  Ibaa is a new community to live in peace.  I give praise to Governor Wike,  who gave a marching orders to leaders to make peace in their communities or else there would be no development.
“I  make bold to say Ibaa community is in peace and the governor will, in no distance time,  complete the Ibaa-Rumuji-Obelle-Isiokpo road,” he said.
Meanwhile, the Commander in charge of the military deployed in Emohua Local Government Area,  Captain Christian Adukanya, has warned that the accord would be the last peace agreement that would be signed in the community.
According to the peace agreement read out by the commander, the two cult groups led by Chika Ned,  popularly called Bishop  and Chinanu Eleonu, alias Nicked,  must respect constituted authorities in the community and lay down their arms.
The peace accord also read that there should be no form of harassment and extortion from any member of the group, while a monitoring committee would be set up to monitor compliance and other conditions.
The was  gathered that the chairman of the Local Government council, Tom Aliezi, assured on provision of electricity.  He said this could help complement the peace accord.
***
Source: Sun News
Top Stories