It opined that the Command within the period also embarked on drug enlightenment campaigns in both secondary and tertiary institutions across the State. 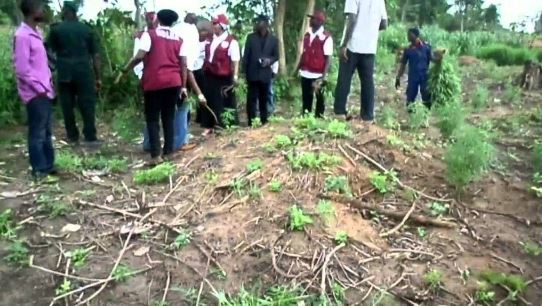 File Photo
The National Drug Law Enforcement Agency (NDLEA), Osun State Command, says its operatives have apprehended a total of 208 suspects in the last twelve months, while illegal substances amounting to 2,424.77kg were seized.
This was contained in a statement signed by the state Commander, Mr Samuel Egbeola, as part of activities to commemorate ‘2019 International Day Against Drug Abuse And Illicit Drug’, a copy of which was made available to journalists in Osogbo, the Osun State capital, on Wednesday.
It added that the 208 suspects arrested were made up of 186 males and 22 females, while the 2,424.77kg of illicit drugs seized comprises 2,290.771kg of cannabis sativa and 133.999kg of psychotropic substances.
According to the statement, vehicles used in committing drug offences were also seized as the command made 26 convictions within the period and destroyed 10.45 hectares of cannabis farm.
It opined that the Command within the period also embarked on drug enlightenment campaigns in both secondary and tertiary institutions across the State.
“We thank the State government for their financial and other assistance in achieving this feat. We are also grateful to several individuals in the State who assisted and are still assisting the Command.
“As you all know that the trade in drug was already recognized as a global problem requiring a global solution at the beginning of the 20th century with the first international conference on narcotic drug held in Shanghai in 1909.
“The United Nation Assembly in 1987 decided to observe 26th June, every year as the International Day Against Drug Abuse and illicit trafficking as an expression of its determination to strengthen action and cooperation to achieve the goal of international society free of drug abuse.
“The United Nations Office on Drug and Crimes, (UNODC) selects themes for the day. The theme for this year is; Health for Justice, Justice for Health. The day is supported by individuals, communities and various organizations all over the world. This year theme highlights that Justice and Health are two sides of the same coin. The theme emphasizes the integrated nature of the rights and health. During this period, we also look back at our activities from the last celebration to date,” the statement read .
In a related development, a group, Dialogue 365, has called on Nigerians to be sensitive to the scourge of drug abuse amongst the youth.
Convener of the group, Comrade Waheed Saka, made this known on Wednesday, at a press conference held at the Osun NUJ Correspondents’ Chapel in Osogbo.
Saka, who commended the government for coming up with legislations against drug trafficking, addiction and abuse, expressed concern over the enforcement of the legislations which he said has been one of the major issues in the fight against the scourge.
He said, “Despite the challenges posed by drug, we have no doubt as an organization that the impact can be mitigated through organized preventive actions which is why we are leading the campaign to prevent greater number of younger ones from abusing drugs.”
The convener said the #JustSayNo campaign would spread information among community members by organizing town hall meetings to raise awareness of the negative impact of drugs and promote healthy lifestyle.
He called for concerted efforts to curb the menace of drug abuse, adding that there is a direct link between the scourge and other criminal activities like kidnapping, terrorism and banditry.
Top Stories