However, the new lady revealed that Biodun, who is the founder and General Overseer of COZA went all out to talk down on his wife just to sleep with her. 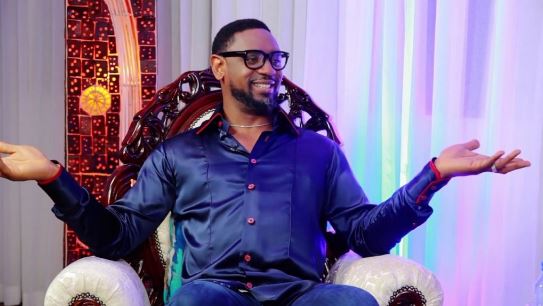 Biodun Fatoyinbo
Another lady identified as Franca E. has come out with rape allegation against the Senior Pastor of COZA, Biodun Fatoyinbo.
The lady said that she has all the evidence intact, in case the pastor dares to deny it.
It was reported that Busola, wife of music star, Timi Dakolo, revealed how the cleric raped her.
The Pastor has since denied the rape allegation, saying that he has not raped anyone even as an unbeliever.
However, the new lady revealed that Biodun, who is the founder and General Overseer of COZA went all out to talk down on his wife just to sleep with her.
She wrote on Instagram, “I was introduced to the church in Abuja by my childhood friend, who moved to Abuja from Calabar two years before I did. When I joined, she was also a PCU worker.
“I really felt welcome in the church up until my friend started having problems with other women. She told me it was because Pastor Biodun trusted her with so many official things even above workers that were there before her.
“I believed her until the day she had an misunderstanding with another worker who called her ‘Ashewo Mary Magdalene’ in the church. After that, her enthusiasm for church started waning while mine was getting stronger till the day she told me she was leaving the church and shortly after she left. 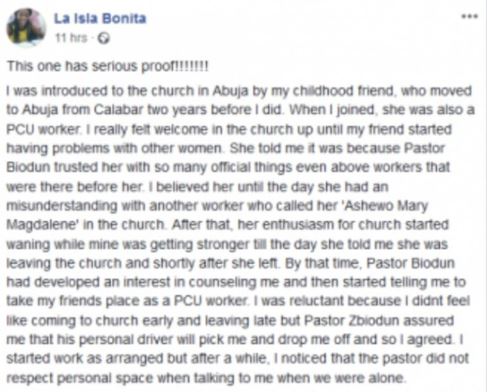 “By that time, Pastor Biodun had developed an interest in counseling me and then started telling me to take my friends place as a PCU worker. I was reluctant because I didnt feel like coming to church early and leaving late but Pastor Zbiodun assured me that his personal driver will pick me and drop me off and so I agreed.
“I started work as arranged but after a while, I noticed that the pastor did not respect personal space when talking to me when we were alone.
“He would stand soooooo close and rub my upper arms or my back which made me very uncomfortable. The final straw was when he said I should go with him to Lagos to take notes and transfer same online immediately for some Pentecostal thing he was attending and he knew I was very computer literate.
“I was excited till we reached Lagos and I realized that only one room was booked at the Wheatbaker Hotel, Ikoyi. Of course I complaint and the Pastor called the front desk ( or pretended to) to demand for another room.
“He said they would call back when the room was ready. He then told me to help massage his back becos he has back ache from sitting on the flight. I said I was tired since it was already after 8. He then insisted I lay down on the bed to rest while waiting.
“I said I preferred to sit at the desk and he laughed saying that I was acting like a small girl or a village uneducated girl. He then went in to take a shower. I then called the front desk to remind then about the extra room.
“I wasn’t surprised when I was told that they had vacant rooms and that nobody had requested for an extra room. By this time, I knew what was up and was ready for the fool.
“I opened his pouch and saw his wallet which had his lisence. Took a picture of the wallet and the Lisence on the pillow on the bed with my head in the shot. I opened the door and took several pictures of myself, the wallet and the Lisence with the room number.
“Came back in, once I heard the shower stop, I started audio recording on my BB. He came out with a towel around his waist and started telling me how attracted he was to me.
“He said many deregatory things about his wife, calling her a postcard…pretty on the outside but flat and empty upstairs. He said sex with her was like having sex with a cold dead fish…he tried to kiss me and I stood up, picked up my travelling bag, moved to the door, opened it and quickly took a picture of him, standing with a towel around him.
“He started begging. I called him all sorts of names and insisted he give me money for a separate room or I would scream ‘rape’. To cut a long story short, he asked me to shut the door, I refused, he brought out 2 bundles of N1000 and asked me to delete before he gives me the money.
“I told him he was in no position to negotiate. Got the money, left the Randy goat with a deflated erection and checked into another room.
“First thing the next morning, I left for ABJ. By the way, remember my childhood friend that introduced me toCOZA? I narrated my experience to her and she confessed that she was sleeping with Biodun for over a year, even on his marital bed when his wife travelled. Oga Pastor, try and deny my story publicly and see American wonder….I still have the pictures and our conversation on tape. Thank God for technology.”
Top Stories