Pregnant Woman, 15 Others Feared Dead As Boat Capsizes In Lagos


A pregnant woman and some 15 other persons have been feared dead after a boat capsized in the city of Lagos. 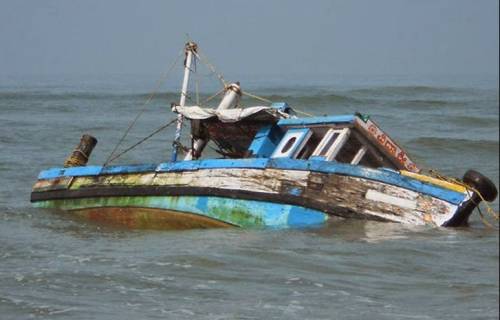 File photo
According to a report by Vanguard, no fewer than 16 persons were feared dead after a 21-passenger boat capsized, Saturday, in Ijede, Ikorodu Local Government Area, Lagos State.
According to report, the bodies of a pregnant woman and two others have so far been recovered by officials of Lagos State Waterways Authority, LASWA; State Emergency Management Agency, LASEMA; Marine Police and other rescue workers.
It was learned that three of the passengers survived after swimming to the shore, where they were rescued by residents.
It was also gathered that the high casualties was because none of the passengers was putting on a life jacket.
According to report, the driver of the boat was returning from a mechanic workshop, where he had gone to fix the boat when he saw the passengers and after much appeal from the passengers, decided to convey them to Ijede.
Residents recount
Ade Sulaimon, a resident, told Vanguard that one of the survivors, who he identified as Mayowa, alerted the community at about 1a.m. of the mishap.
Sulaimon said: “I was asleep when he banged on my door, demanding I wake up. He then narrated what transpired on the waterways to us. Immediately, we set out with the aim to rescue some of the passengers, but the exercise could not yield any result until 9a.m., when we recovered a pregnant woman.”
He identified one of the bodies recovered as Alhaji Jamiu Ojikutu and one Chibueze Nwane as missing.
A resident, Pa Ola Solanke, in an interview with Vanguard, lamented that this was the third mishap recorded lately.
According to him, “they are toying with the lives of the people. It is sad that the relatives of those that died before this have not be compensated.
“So what is the guarantee that the families of those that died now would be compensated.”
Boat had mechanical fault—Ijede council boss
In an interview with Vanguard, Chairman, Ijede Local Council Development Area, LCDA, Salisu Jimoh, said from his interactions with one of the survivors, he was told that the boat developed mechanical fault mid-journey and few minutes after it was filled with water.
LASWA speaks
Confirming the mishap, General Manager of LASWA, Damilola Emmanuel, said the accident occurred at about 11: 20p.m. on Saturday.
Damilola explained that the boat left Badore Terminal for Egbin Jetty in Ijede Ikorodu, but capsized midway, minutes after leaving the terminal.
He added: “The boat was said to have about 20 passengers onboard at the time. After being hit by several waves, it capsized and emptied all passengers into the lagoon.
“Three passengers swam to safety, while the others didn’t make it. And at 9a.m. this morning(Sunday) a corpse was pulled out from the lagoon after hours of search.”
…LASEMA CEO, too
Chief Executive Officer of LASEMA, Dr. Femi Oke-Osanyintolu, confirmed to Vanguard  that 20 passengers were onboard the ill-fated boat.
While accusing the operator of violating extant rules, Oke-Osanyintolu said: “It is pathetic that despite several sensitisation and warnings by government over ban on night travelling, boat operators still flouted the law.
“Aside that, the operator did not have life-buoy and life-jackets in his boat. So none of the passengers had life jacket on.”
He disclosed that the bodies of the three persons recovered have been handed over to their families for burial, after proper identification.
The LASEMA boss assured that search-and-rescue operations were still ongoing, saying “we will ensure no one is left behind.”
***
Source: Vanguard
Top Stories