A suspected robber has been nabbed in the church by members during a service in a community in Benue state. 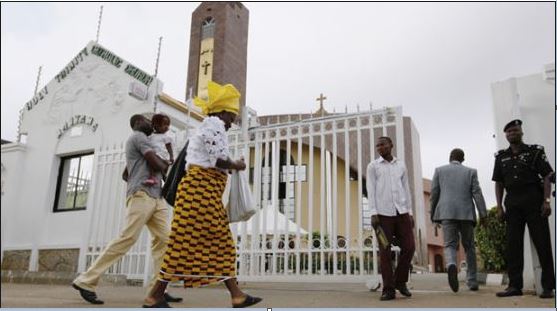 File photo
According to a report by Punch Metro, a suspected armed robber, identified as Terkaa Tsamber, allegedly invaded the Dunamis Church located along the Modern Market Road, Makurdi, the Benue State capital, on Sunday and stole the offering and other valuable items worth several thousands of naira.
The suspect reportedly came into the church and made his way to the pastor’s office shortly after the end of second service around 10am.
Luck ran out on him when a little girl from the children’s church sighted him while allegedly carrying out the robbery.
When he realised that he had been seen, the suspect reportedly brought out a gun, which made the girl to scream for help.
A Punch Metro correspondent, who attended the church service, reported that hardly had the worshipers, who came for the third service, settled down when the incident happened.
The little girl pointed at the direction of the suspect and shouted that someone was holding a gun after she sighted him taking something across the fence.
It was in that process that some members of the church scaled the fence and went after the suspect and traced him to a neighbouring house.
A member of the church, who was among those that went after the suspected robber, said, “Immediately we saw him inside the building, the suspect brought out a gun but we later discovered that there was no bullet in it; if it was loaded, perhaps he could have shot at us.”
The member, who spoke on condition of anonymity, told our correspondent that an armed robbery gang had few days before burgled the church office and stole laptops, handsets belonging to the pastor and offering.
He said, “This morning, we were inside the church auditorium for the third service when we heard a little girl screaming and we all went towards the direction only for us to see someone jumping over the fence with some items.
“We went after him and traced him to a nearby building not too far from the church. Immediately he saw us, he brought out a gun but there was no bullet in it and he dropped it and took an axe.
“However, we overpowered him. That was how we caught him and brought him to the church before we called the police.”
The resident pastor in charge of the church, Joseph Idakwoji, said he discovered that armed robbers broke into his office after the last Friday service and wonders’ night and made away with some items including handsets, the offering, packs of fruit juice and a stabilizer.
Idakwoji stated, “When I came to the church office yesterday (Saturday) after our last worship and wonders’ night, I discovered that thieves had invaded the church and made away with things from my office. So, I prayed, laid a curse on them and anointed the entrance they came through.
“I told God that am not going to lock the office and that God should manifest His power and glory by allowing whoever that broke into my office to come back and steal again in the daytime so that he would be caught.
“Behold, few minutes into the third service, I was on the altar conducting the service when I heard some members of the church shouting and screaming. Few members, who went after him, caught him and brought him to the church. Then our boys wanted to apply juggle justice on him but I prevailed on them and I called the police, who came and picked him to their station.
“It took the intervention of the areas boys and some members of the church to arrest the thief.”
The suspect, Tsamber, appealed to the pastor not to kill him, saying that he regretted his action.
“Truly, I don’t know what came over me. Don’t allow the people to kill me. I am ready to repent and never steal again. This is my first time of coming to steal here. I don’t know those who came to steal from the church the last time,” he said.
When contacted, the Police Public Relations Officer in the state, DSP Sewuse Anene, said that she had yet to be briefed about the matter.
Top Stories