Buhari Is The Worst President Nigeria Has Ever Had Since 1999, New Polls Reveal


New polls have claimed that President Muhammadu Buhari is the worst president Nigeria has had since 1999. 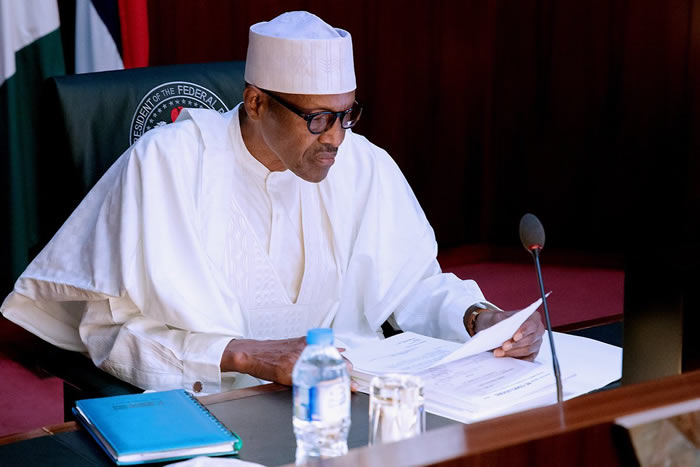 Muhammadu Buhari
Over 48,000 Nigerians on social media have voted President Muhammadu Buhari as the worst president Nigeria has ever had since the return to democracy in 1999.
SaharaReporters had organized online polls on Facebook and Twitter asking Nigerians on the social media to select their worst president the country has ever had.
Twitter had the three ex-presidents that had ruled the country; Olusegun Obasanjo, Umaru Musa Yar’adua and Goodluck Jonathan along with the incumbent President Muhammadu Buhari.
On Facebook, the poll had only Olusegun Obasanjo and Muhammadu Buhari.
The poll had a total of 28,000 votes on Twitter and 49,000 votes on Facebook. The two polls unilaterally produced President Buhari as the winner with a wide margin between him and next person on the poll. 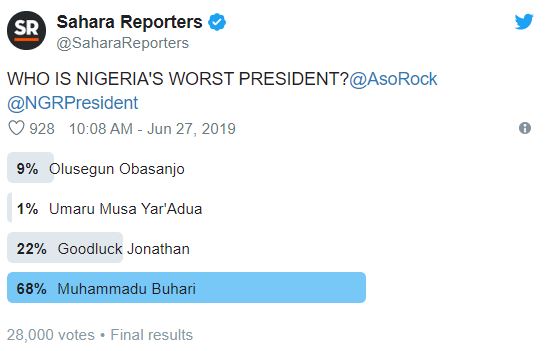 Of the 49,000 votes on SaharaReporters' Facebook poll, President Buhari had the highest number of votes as the worst president the country has ever produced since the advent of democracy in 1999 with 29,000 votes.
On the other hand, ex-president Obasanjo had a total vote of 20,000.

Some Facebook users gave reasons for their vote.
Ayodele Oluwafemi said, “Who is PMB to even compare him with Obj in the committee of superpowers? It's such a shameful thing to do. Haba! What contribution did PMB make to Nigeria except take an appointment of a tyrant like him as PDTF Chairman.”
Jude Ola said, “Buhari is a disaster to Nigeria... in fact the meaning of Buhari is poverty and bad luck... it shall never be well with the generations of those who impose Buhari to us... I came home last year for vacation, I spend two week and I'm in haste to go back to another man's land where I found peace of mind.”
Iyke Eze stated, “The difference is very clear, never you compare a failure to OBJ.”
John Goodluck said, “Buhari is the worst president that ever happened to Nigeria, he is a cow that keeps on blaming his parents for his failure in life.”
Sotunde Olasile M. Samuel, “I think many people here don't know that OBJ had the greatest opportunity to put Nigeria on the right track, out of selfish interest, he didn't. Now, he created, raised and opened the eyes of this thieves and many are expecting someone who met corrupted blueprints to do wonders, hhhhmmmm, how I wish. #LetCallOnGod. #Naija.”
Of the 28,000 social media users that voted on the Twitter poll, 68% voted for President Buhari while Jonathan, his predecessor, had 22% of votes.
Yar’Adua had the least vote with only 280 votes.
The breakdown of the poll showed Buhari poll 19,040 votes while Jonathan got 6,160 votes.
On his part, Obasanjo received 2,520 votes (9% of the votes) while Yar’Adua had only 1% of the votes.
Some of the reasons given for their votes were insecurity, inability to develop the economy.
Tajudeen said, “The fact still remains, Buhari was given a broken country with no means of surviving: collapsed economy; collapsed security; collapsed infrastructure; collapsed refinery; borrowing to pay salaries and 23 states unable to pay too.”
N. O. J  @owolabi4r said, “I choose OBJ.....Obj started the government in 1999 and he should have make things right now  what is bad making June12 democracy day and a lot of things you should have change.I have a question for him.
Why did our senators take home money so much like that.”
Bolaji C. Adedayo @0110883 said, “The Presidents are not bad...the citizens are worst! Reason; They keep making mistakes at every election...  electing thieves! Selling their votes! Allowing taxi drivers and   senseless school dropouts to control the future of their children! Eventually, a terrible leaders comes.”
Abdurrauf Ishaq @Itz_ishaq_alraf said, “PMB follow by Jonathan next to him Obasanjo n YAR ADUA is not supposed to be here cuz YAR ADUA’s administration is the best we have ever have since from independence to date. in fact from colonial masters to date non like UMARU #RIPMENTOR.”
The Twitter poll was done thrice due to some errors in the questions.
***
Source: SaharaReporters
Top Stories