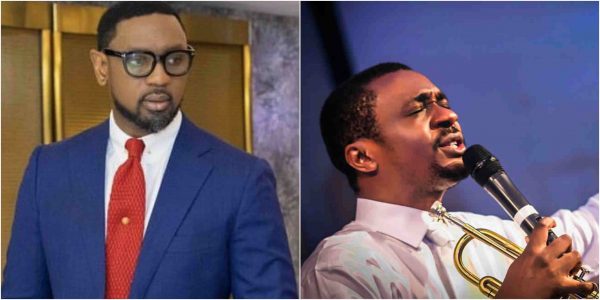 Pastor Biodun Fatoyinbo and Nathaniel Bassey
Gospel singer and pastor, Nathaniel Bassey has reacted to the allegations of rape brought against Pastor Biodun Fatoyinbo of COZA church.
Bassey said he sees what’s happening as God’s mighty hand in his church.
According to him, what is happening to Biodun was God’s way of cleansing the church and whatever is happening at the moment is not new.
He stated that incidents of this nature happened in the Bible Times, but the elders in the Church had their ways of resolving and dealing with the issues.
Recall that after an intense protest at the premises of the COZA Church, Abuja yesterday by some Nigerians, the senior pastor of the church Biodun Fatoyinbo, who is being accused of allegedly raping Busola Dakolo, has finally stepped down.
He announced his leave of absence from the pulpit via his verified Instagram page.
He wrote,
"The past few days have been sobering for me. I have taken time to pray and seek spiritual counsel from Christian leaders around the world, who feel very concerned about the ongoing reports in the media. I have solicited their guidance on actions, I should take that are honouring to our Lord Jesus Christ and the work, he has called me to do.
“Drawing from their counsel and that of the leadership of the Commonwealth of Zion Assembly and owing to my love for God’s word and sacred honour of my calling, I have decided to take a leave of absence from the pulpit of the church.”
He went on to ask for prayers for himself and his congregation “during these turbulent times”.
Watch video below: