A man who has been parading himself as a prince and royalty has been humiliated at the Oba of Benin's palace. 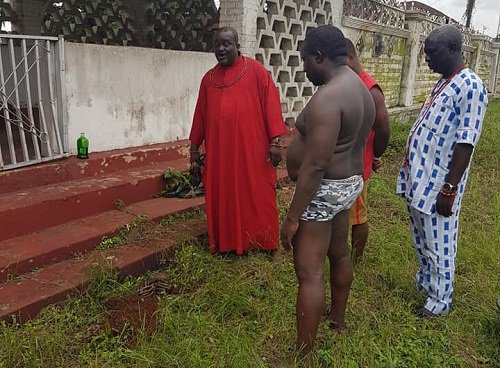 Chief Okoro
A member of the Ibiwe Society, Chief Okoro Idusere, has been stripped for parading himself as an Enogie (Duke) and using insignia of palace royalty in his car, TheNation has reported.
Chief Idusere also wore beads only used by Enigies and top palace functionaries and must have been presented to them by the Oba of Bénin.
In a viral video, the palace Ewaise (diviners) and Secretary of Bénin Traditional Council, Mr. Frank Irabor, were seen interrogating Chief Idusere.
Chief Idusere agreed he was not an Enogie and was not given coral beads by the Oba.
Irabor informed him of the consequences of parading himself as an Enogie and using royalty insignia on his car.
Idusere was also accused of using the insignia to sell land, settle traditional dispute illegally and passing sensitive information to some people like Murphy Face.
Murphy Face is reputed to using the social media to denigrate the Bénin Kingdom and its royalty.
Idusere, who denied conniving with others to denigrate the Palace using various social media platforms, agreed to swear any oath on any altar (juju) in the palace.
He was heard explaining how he wanted to form the Bénin Royal Army since the sect belonged to the last line of defence.
Idusere was later seen on his pants on swearing oath after a cock was slaughtered.
It was gathered that Idusere would be arraigned Tuesday for violating the Edo State Chieftaincy and Traditional Rulers Laws.
Top Stories