Police Officer Beaten To Death By Three Friends In Ibadan


A police officer has died an unfortunate death after he was reportedly beaten to death in Ibadan. 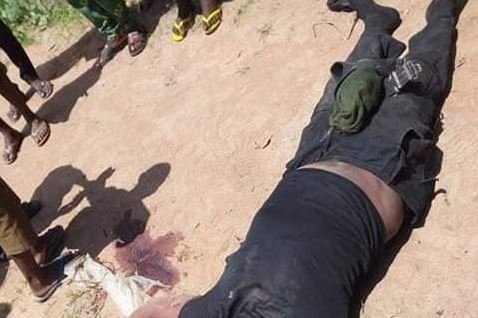 File photo
An Iyaganku Magistrates’ Court, Ibadan, on Tuesday ordered that three men who allegedly beat a policeman to death, be remanded in prison, pending legal advice.
The Magistrate, Mrs Mercy Amole-Ajimoti, ordered that Abubakar Mohammed, 25; Salisu Usman, 20; and Ajayi Ojo, 32, be remanded in Agodi prison.
Amole-Ajimoti, who did not take the plea of the defendants, ordered the police to return the case file to the Oyo State Directorate of Public Prosecution (DPP).
She, subsequently, adjourned the case until July 15, for mention.
The Prosecution Counsel, Insp. Sunday Ojeleye, told the court that the three defendants allegedly conspired to commit the offence on March 22, by 7 p.m. at Sabo area, Mokola, Ibadan.
Ojeleye alleged that the defendants assaulted Insp. Tirimisiyu Akinola, with dangerous weapons at Sabo, while on lawful duty in a dark spot in the area.
The deceased, he said, was a policeman attached to the  Area Command, Iyaganku, Ibadan, and led a team of policemen to Sabo.
The prosecution said the offence contravened the provisions of Section 316 and punishable under Sections 319 and 324.
Top Stories