Synagogue Church of All Nations Reacts To R*pe allegation Against T.B Joshua With Evidence (Video)


It was reported on Sunday that a woman had surfaced, levelling a rape allegation against T.B Joshua. 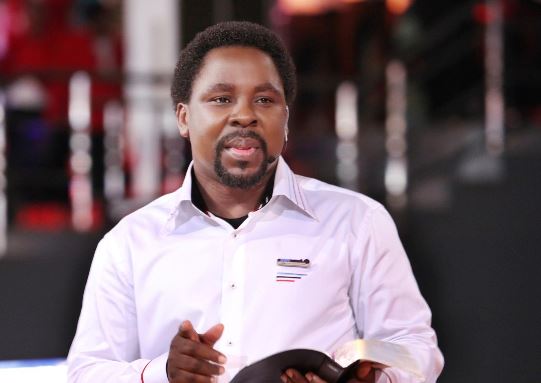 Prophet T. B Joshua
The Synagogue Church of All Nations, SCOAN, has reacted to the video making the rounds on social media where a placard-carrying woman accused its founder, Prophet T. B Joshua of rape.
It was reported on Sunday that a woman had surfaced, levelling a rape allegation against T.B Joshua.
SCOAN described the lady as mentally ill in a statement made available to the media on Tuesday.
The statement read, “Since the beginning of the week, one of the topic that hasn’t left the mouth of the public is the rape issue happening everywhere, there has been allegations on men of God and one of the most recent is that of Prophet TB Joshua, the founder of Synagogue church of all nations.
“A lady, identified as Bisola Johnson has been parading herself as a victim of rape by the man of God, in the light of Biodun Fatoyinbo’s case.
“She revealed that she was kept captive in SCOAN for 14 years and was raped for same 14 years by Prophet TB Joshua.
‘In response to this, the church has released a video of the said woman during her first appearance in the church, she made it known in the video that she willingly came to SCOAN for deliverance from the spirit of death and after some time, she vanished.
“It will also be recalled that she came up some years back to make same allegations but because of the unbelievable story, she didn’t get the attention of people which is why she came up now with her story now that rape is trending.”
Watch the video below: