A witness has revealed how two formr NBA chairmen, Adesina Ogunlana and Yinka Farounbi, converted funds to personal use. 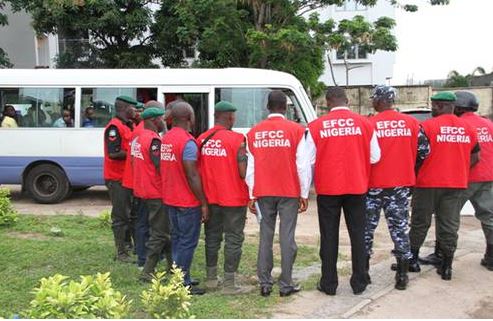 EFCC
According to a report by Premium Times, the trial of two former chairmen of the Nigeria Bar Association, (NBA), Adesina Ogunlana and Yinka Farounbi, continued on Wednesday, at the Special Offences Court.
Both were arraigned for allegedly defrauding the association of N20 million.
The Economic and Financial Crimes Commission (EFCC) in May arraigned the duo before Justice Mojisola Dada on a 30-count charge bordering on conspiracy to commit a felony, money laundering and stealing.
Mr Farounbi served as NBA Ikeja Branch chairman between 2014 and 2016 while Mr Ogunlana served the same branch from 2016 to 2018.
In a statement signed by the agency’s spokesperson, Tony Orilade, he said the defendants, who were signatories to the accounts of the NBA, Ikeja branch, allegedly signed some cheques.
”The ‘second and third defendants’ allegedly gave the cheques to the first defendant, Ogunlana, to cash fraudulently.”
Court Session
According to the statement, the defendants pleaded not guilty to the charges preferred against them.
At the resumed hearing today, the first prosecution witness, Mr Okoye, told the court how the second and third defendants, signed multiple cheques in favour of the first defendant, Mr Ogunlana and how he used same to pay off personal debts.
Samuel Daji, the prosecution counsel, told the court that the ‘major account’ of the association with WEMA Bank Plc was still being operated by the second and third defendants.
“After their tenure had expired contrary to the succinct provisions of the Uniform By-laws of the Branches 2015, which makes it mandatory that all officers of the branch must hand over to their successors within seven days of the expiration of their tenure. This is tantamount to professional misconduct under the Association’s By-law.”
In his testimony, the second prosecution witness, Olubunmi Odeniyi, who is the present Provost of the NBA, Ikeja branch, also informed the court that he discovered that premiums paid by members were not remitted to any insurance company as at the time of his investigation.
The case was adjourned to June 9 and 10 for the continuation of trial.
Top Stories