This was disclosed by respected Spanish journalist and former Head of Marca, Eduardo Inda. 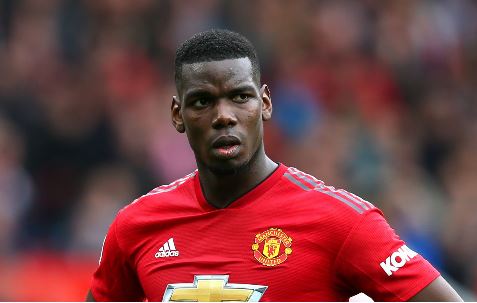 Paul Pogba
France World Cup winner, Paul Pogba, is set to finally join Real Madrid from Manchester United in a huge swap deal involving winger, Gareth Bale, plus €80million next week.
This was disclosed by respected Spanish journalist and former Head of Marca, Eduardo Inda.
Inda stated this in an interview with Spanish TV station, El Chiringuito, on Thursday.
He said: “The Juventus thing is a trick of Raiola to raise the price.
“The only favorable thing for Pogba to go to Juventus is taxation.
“I think that next week, Pogba will be a new Real Madrid player.
“The issue is very advanced, Madrid offers €80m in cash plus [Gareth] Bale, which they estimate is worth €90m.”
It was reported that Pogba is set to leave Man United in this summer’s transfer window after he told reporters in Tokyo, Japan last month that he wants “a new challenge”.
“I think for me it could be a good time to have a new challenge somewhere else,” Pogba said.
“For me, I have been for three years in Manchester and have been doing great; some good moments and some bad moments, like everybody, like everywhere else.
“After this season and everything that happened this season, with my season being my best season as well.”
Top Stories