Nigerians have taken to social media to react after a former staff of the Commonwealth of Zion Assembly accused Pastor Biodun of rape. 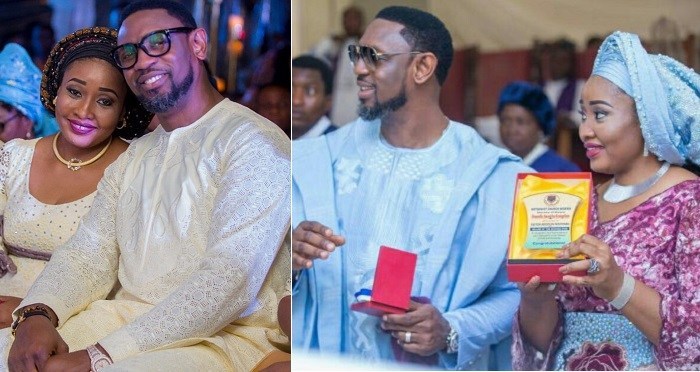 Pastor Biodun and wife
Following the shocking revelation by another Ex-COZA accusing Commonwealth of Zion Assembly, COZA founder, Pastor Biodun Fatoyinbo of rape, Nigerians have come out in their numbers to react.
The lady, who hid her identity and her face while narrating her story in an interview with Y!TV, said the incident happened in 2017 at the pastor’s house.
She said she was an employee of COZA, who worked directly with the pastor, and was also a member of the church.
According to her, Pastor Fatoyinbo asked her to come to his house outside Nigeria on the particular day (a Thursday morning), to take some instructions on certain errands to run.
Upon arrival, the scenario changed as Fatoyinbo stopped discussing church matters and grabbed her.
She said: “Biodun Fatoyinbo raped me sometime in September 2017 at his apartment outside Nigeria, we were discussing in his office on a couch before I knew it he dragged me towards him.
“He took off my zipper, one hand putting me to the couch at that point I didn’t know what to do because I had to fight sexual abuse as a teenager. I felt I had put myself in the space.
“Everything moved quickly from there and then he started trying to pull me into a hug and started kissing me which I found shocking. I had known him as a spiritual leader and I was about to witness opposite of everything that I thought he stood for.
“I was too shocked. It was a couch. I don’t know whether I should hold on to something. I remember telling him continuously ‘you can’t do that, you can’t do that.”
This latest allegation is coming after the wife of popular musician, Timi Dakolo, Busola, had alleged that the COZA founder forcefully raped her when she was young.
Fatoyinbo, who denied the allegation, however admitted that Busola once attended the same church with his family.
The clergyman consequently ordered his lawyers to institute both criminal and civil cases against Busola.
However, Nigerians, who took to their Twitter handles to react to the latest allegation, wrote the following: @MsAyomidele: “A gentle reminder that Biodun Fatoyinbo is a rapist.”
@RealAtise: “Now to the big question, what is so special about “Biodun Fatoyinbo”?? Could all these women be lying at the same time?”
@mikeyemelie: “The strategy is killing me already.. When it seems like everything is dying down, another interview is unleashed. Biodun Fatoyinbo this is definitely going to be a long walk to innocence.”
@bokkie_84: “Models Fatoyinbo and Biodun Fatoyinbo, at this junction I just pray that God forgives you two. This is shameless!!!!!!!!!?”
@EneSoulfood: “Shey you people can see! Biodun Fatoyinbo is a rapist! Anyone supporting him or trying “connect” the dots or make “sense” of these is a Rape Apologist! He needs to be in jail for hurting so many women”
@biwomdz: “Their children, brings them really close to the family so that Biodun can “study” them before he eventually plans how to attack. She is just as guilty as he is.
“The COZA 12”? These are “mentors” of Biodun Fatoyinbo which apparently all COZA members know. Cultish?”
@RickAnji: “COZA is complicit in these rape allegations. The stories emanating from alleged victims of Biodun Fatoyinbo are numerous. I’m seeing talk of covered teen pregnancy.
“Female Ushers ushered out of the church for making complaints of sexual harassment.
“All happening in said church.”
@Stansuper6: “The slippery slope ever heard of it? That’s what Biodun Fatoyinbo is on at the moment. Those he allegedly abused are coming out, those he had an affair with/those who even seduced him and he fell but were scorned can claim otherwise. How does he tell the world the difference?”
@Prodigalangelo: “Biko is Biodun fatoyinbo the only man of GOD in Nigeria?”
@barnaby04: “As the saying goes, 99 days for the thief and 1 day for the owner, all the ladies coming out today to allege pastor Biodun Fatoyinbo of sexual impropriety cannot all be said to be lying. It is what one has a weakness for that one can be accused of doing.”
@mr_adigun: “This Biodun Fatoyinbo thing is now like a docu-series #SurvivingBiodun. He needs to be locked up tbh, one too many.”
Video…
Top Stories